Housekeeper for any state at the current stage of development of particular importance mineral resources. Mineral resources - natural substances of mineral origin that is used in  economy as raw material or energy source. They are fundamental material production and use in all its branches. 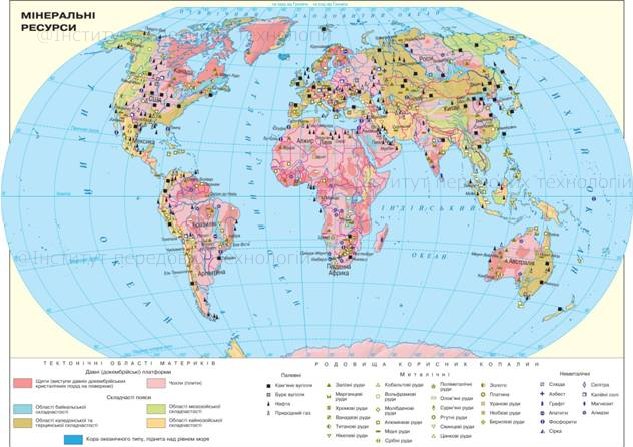 Rate deepening pretty hard because it is impossible determine their value in the crust. Depending on the degree of exploration  resource stocks differ from projected to explored. Rating of mineral resources may vary over time. Through scientific and technological advances are available to operate more and  new fields.

In the earth's crust has more than 200 kinds of mineral resources, including produce more than 160. Annually from the earth's interior producing over 120 billion tons  various raw materials and fuel. Modern accommodation minerals world - is the result of long and complex process of geological development  Earth. It is closely related to geological and tectonic structure. The natural accumulation of minerals known deposits, and accumulation deposits - Pool minerals. 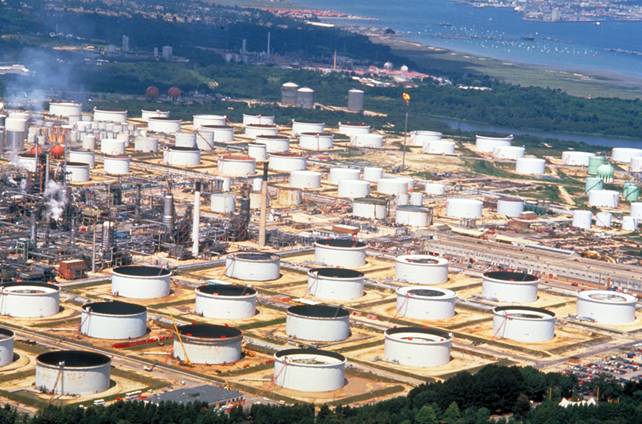 Fuel and energy resources of the world pretty significant, but they are  to comprehensive and irretrievable. In their structure dominated by coal (Black and brown) - 75%. Its resources are concentrated in 3 thousand pools in 75 countries mainly Northern Hemisphere. 2 / 3 of world reserves coal comes from four countries: USA, Russia, India and China. The most powerful in the world coalfield - Tunhuskyy, Lensky, Kuznetsk, Ruhr and Appalachian. ? world reserves of brown coal falls on the U.S. and Russia. Top Bath - Lensky, Cannes-Achinsk, Cologne.

Oil and gas, due to similar geological origin in most cases occur together. Today, the world's prospected over 600 oil and gas basins. Over? world's oil is concentrated in Saudi Arabia. Almost? gas reserves accounted for Russia and the countries Near and Middle East. 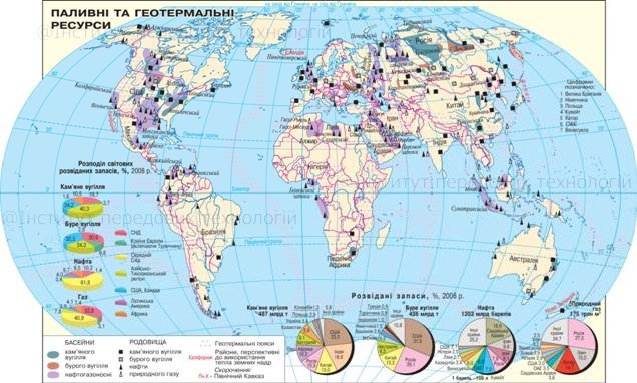 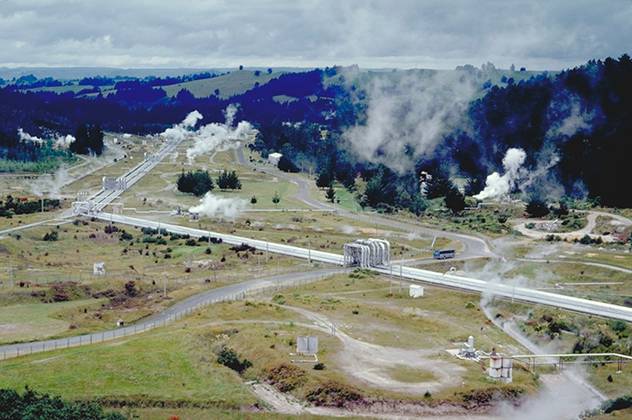 Ore (metal) resources their content in the Earth's crust is divided into two categories - common (content over 0.1%) and rare.

By using ore ores are divided into: 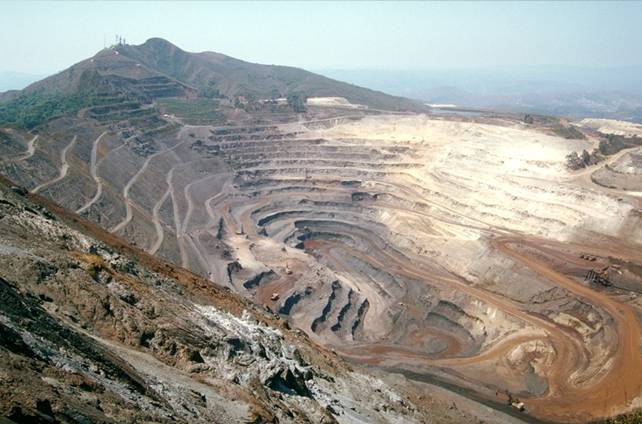 Provision of regional stocks of various types of mineral resources played a large role in forming and placing many areas of the world economy. Use of mineral raw materials, the level of its involvement in production, the degree of technological and environmental treatment is an indicator of the economy. Economically developed countries tend to act as a consumer of mineral resources, and developing countries, their producers and exporters.

Land. One of the greatest wealth of any country is its land resources. Land - part of the earth's surface suitable for life and commercial activity. The territory also can be considered a kind of resource. It serves as the basis for spatial locations of all branches of the main means of production agriculture and forestry. The area has become a kind of deficit, especially in small room, but with numerous population countries (Japan, Netherlands, Denmark). 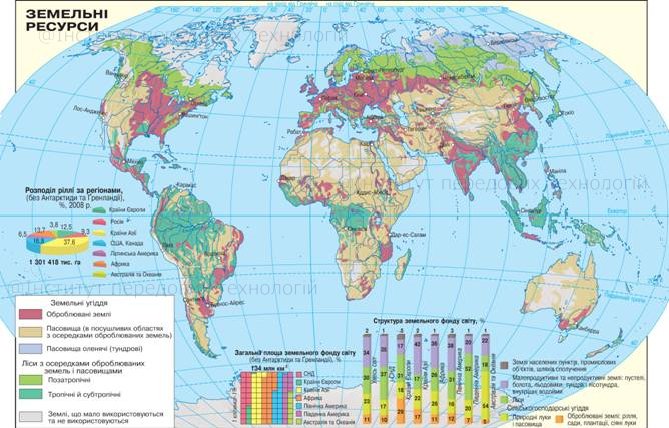 World Land Fund is 13.4 billion hectares (the area of land without Antarctica and Greenland), or 26,3% of the total area of the globe. 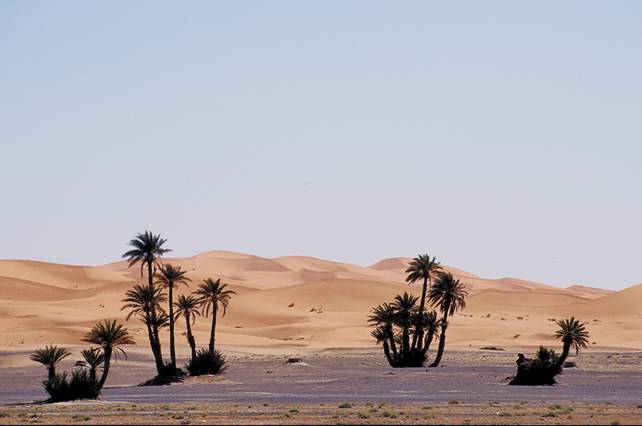 Countries and regions unequally provided with land, especially agricultural land. In Eurasia account  59% of global arable land, to North and Central America - 15% of Africa - 15% of South America - 8% of Australia - 3%. Most part (80%) of the world arable land is located in the arid zone. Most share pastures - in Africa (24%) and Asia (18%).

The rate of world agricultural land to capita is - 0,23 hectares. In different countries this figure significantly different. d Australia it is - 2,45 hectares, Canada - 1.48 ha, Russia - 0,9 hectares. In China, Bangladesh and Belgium each resident accounts for 0.07 ha, Egypt - 0,05 hectares, Japan - 0,03 hectares.

Unsustainable land use has repeatedly led to environmental management, even to death of civilizations. SKD U.S. plains, virgin lands of Kazakhstan caused blowing and flushing huge quantities of mineral water particles that no human impact remained motionless for thousands of years. In large areas of steppe and prairie dust storms raged, yellow fog of dust postponed to hundreds of miles from the crash site. 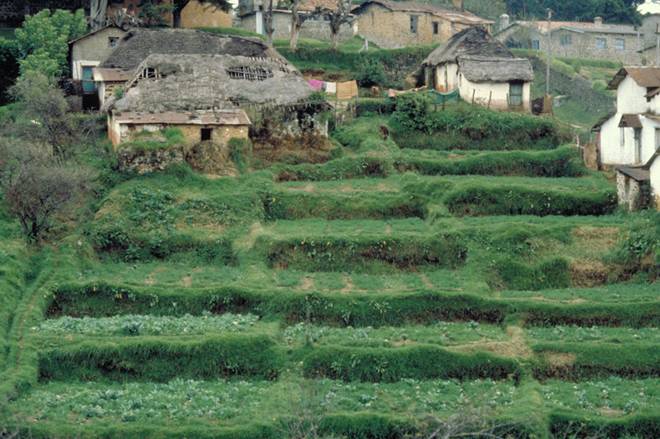 Today almost no remaining land that can absorb more. Along with the agricultural use is removed annually by various data, 6-7 million hectares of agricultural land through waterlogging, salinization, desertification, wind erosion. To pause  This process should be made of measures of land protection.

Water - one of the most common and specific substances in nature. It is believed that life originated in water on our planet. Water resources - surface and ground water used or can be use in economic activities. 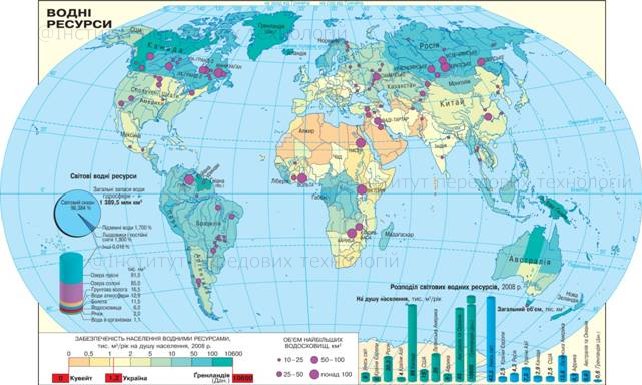 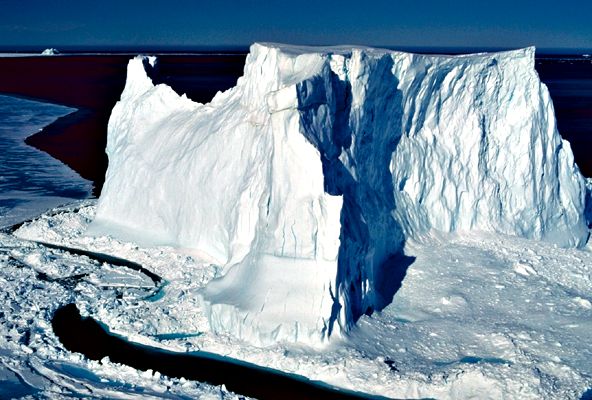 First, demand is fresh water. The main source of fresh water for industry, agriculture, domestic needs were  remaining river water. They are unevenly distributed. Top the full resources of the river flow is concentrated in Asia and Latin America, and the least endowed with this resource is Australia. 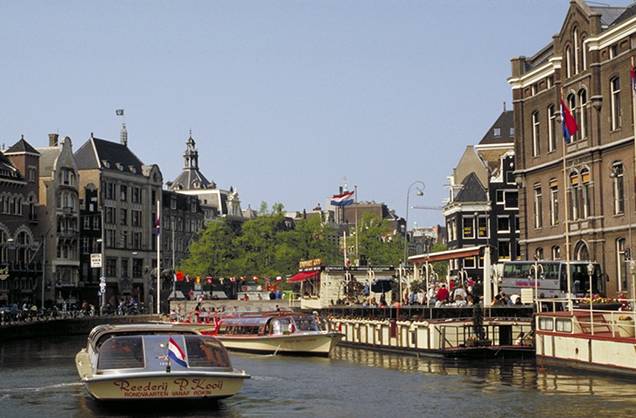 In the drylands, which cover about 30% of the Earth water scarcity is felt especially acutely. Here are the least vodozabezpecheni countries: South Africa, Saudi Arabia, Egypt, India, China.

The peculiar chambers of freshwater lakes and reservoirs are. Thus, Russia's Lake Baikal mstytsya 26% of the world's fresh water, and African Lake Victoria, the largest by area in the world, contains as much fresh water as the reservoir will contain all of India.

The main part (69%) of world water resources mankind uses in  agriculture for irrigation. Water resources used in industry as a solvent chemicals  and industrial water for cooling and production electricity. 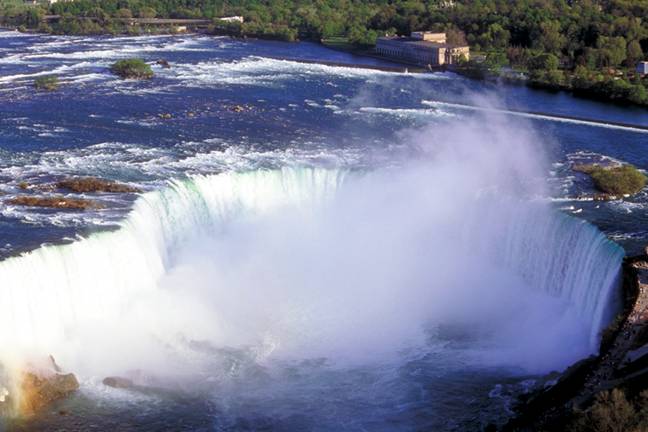 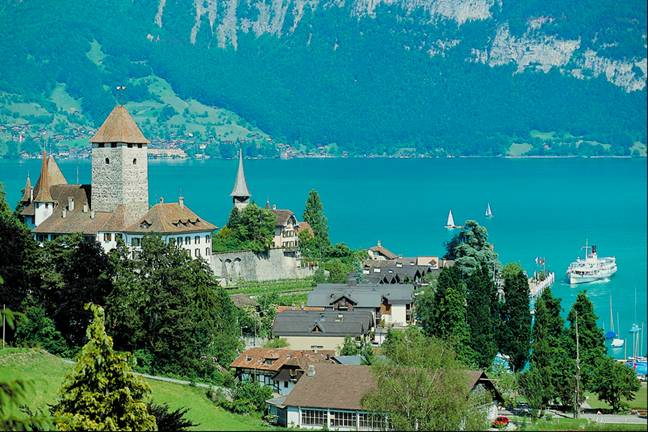 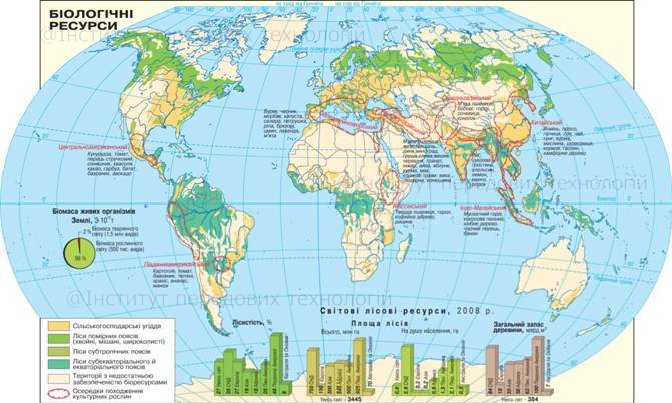 Forests cover about 25% of the planet's surface. It is 41 million km2 land. Wood stock - 330 billion m3. This figure is constantly changing: forest grows, it cut down. Unfortunately, the pace of forest clearing rates exceeding recovery.

Conditionally all world forests are divided into two zones: the north, including  Forests in temperate, subtropical zones, and south, covering equatorial area, subekvatorialnoho and tropical zones. 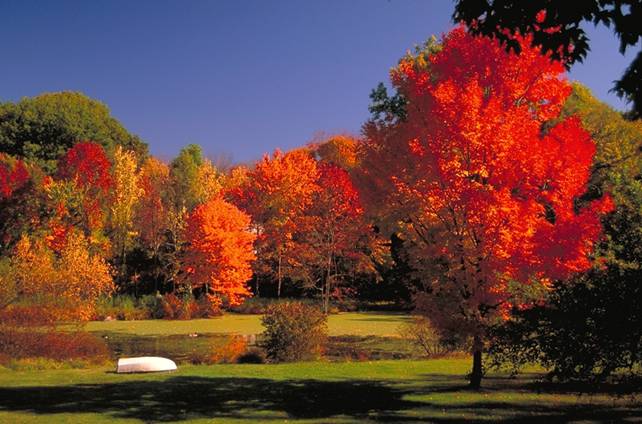 The forests of the southern forest zone is mainly represented broadleaf species. Within this zone, especially emit Latin America both in terms of forest cover and in terms stocks of wood. Recognized leader of Brazil. It ranks third in world (after Russia and Canada) in terms of area under forest cover. Large forested regions characterized by such a small area of the country, like Suriname (96,2%), Belize (92.1%), Guyana (83.8%). On the African continent large timber resources are concentrated in its central part. Here emit such wooded country like the Democratic Republic of the Congo Cameroon, Congo, Equatorial Guinea. Highest figure forested lands are marked and Pacific island countries (Fiji, Solomon Islands, Papua New Guinea).

Countries that have significant forest resources, are essential suppliers of wood on the world market. Therefore, these countries can be traced  tendency to reduce the forest areas. The main cutting occurs in  developing countries, of tropical America and Asia. In these countries are working hardly on lisovidtvorennya. Dangerous was deforestation in mountainous areas. This leads to the mountain desertification. In developed countries of the Northern Hemisphere - Finland, Sweden,  Canada - reforestation than cutting.

For 20 years the world has lost almost 200 million hectares of forests. It is so much  But how much is the U.S. area east of the Mississippi. Together with destruction of forests utrachayutsya unique landscapes disappear thousand species plants and animals. Extremely disastrous deforestation in Amazon and Indonesia.

- Natural environment, objects, phenomena that can be used for recreation and restoration of health. 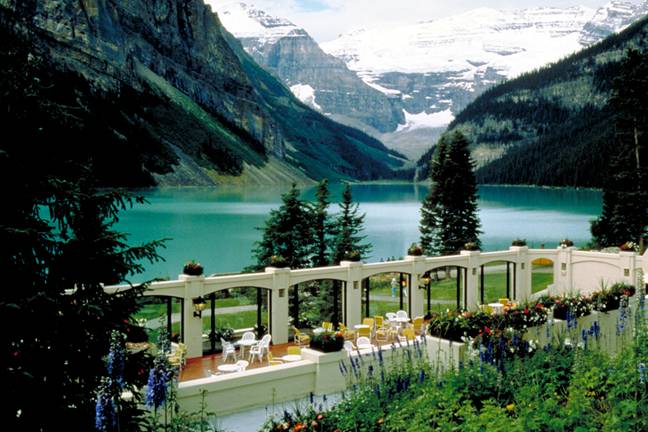 Evaluates these resources for biomedical products, which stipulates is climate and weather. Particularly important are indicators of stability weather, temperature and humidity, creating an effect of comfort for humans. Also, take into account the psychological and aesthetic impact assessment  various natural landscapes. The largest positive effect gives the combination water and land (beaches, coastal seas, rivers, lakes), the average effect gives the lawn and forest, weak effect - the hills and plains. 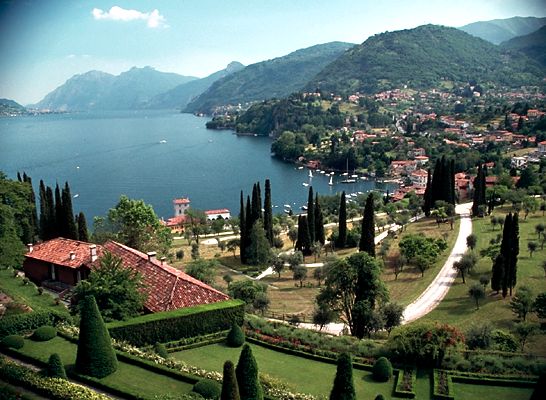 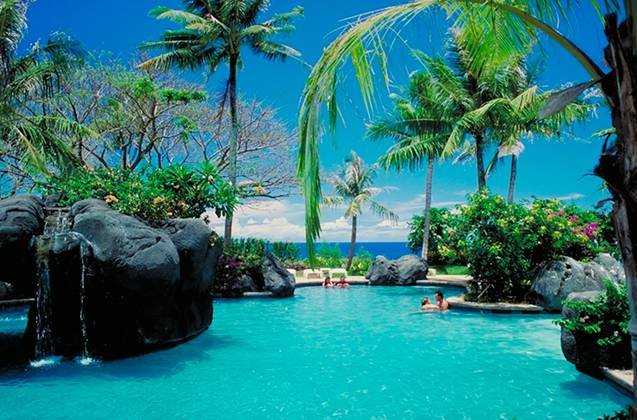 To natural recreational resources are also exits springs and therapeutic mud. Important role for the rest of people have green park area around the cities, national parks.