National Holiday: Proclamation of the Republic (the first Sunday of June) 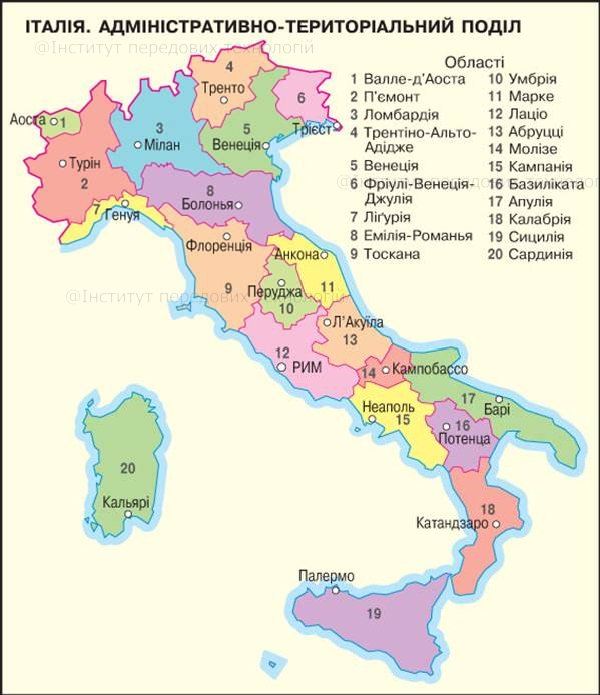 EGP and natural resources potential. Italy - typical  peninsular Mediterranean country that is washed Adriatic, Ionian, Mediterranean, Tyrrhenian and Ligurian seas and has more than 80% of maritime borders. In the north, is bordered with France, Switzerland, Austria and Slovenia. Within Italy there are two enclaves: Vatican (residence of the Pope) and San Marino.

80% of the territories occupied by Italy's mountains, foothills and hills: the Alps of highest point of Mont Blanc 4807 m and heights of the Apennines to 2914 m. The southern slopes of the Alps abruptly break into the fertile plains Padanskoyi. In southern countries are active and extinct volcanoes: Etna, Vesuvius, Stromboli, are earthquakes.

Italian Mediterranean climate. From 600-1000 mm half the annual precipitation falls in spring and summer with strong summer showers accompanied by thunderstorms and hail in the spring and summer are flooding. In the Alps the climate varies with altitude from moderately warm to cold, the snow kept several months, on top of lies constantly. These conditions favor the development of mountain resorts and ski  tourism. Above the peninsula more than 250 days a year - a clear cloudless sky. In southern Apennine peninsula and islands are hot and dry summer, mild winters and warm, the influence sirocco - dry and hot wind Sahara, bringing with it a reddish dust and fever to 33-350C. One fifth of the territory occupied by forests, represented Mediterranean shrubs, areas of cortical and iron oak chestnut and beech forests, groves of pines and Aleppo pines.

Population. Italians make up 94% of the population,  with representatives of other nationalities - a considerable number of Germans French, Greeks, Slovenes, Jews, who live mainly in border areas. In modern Italian living large number refugees, mainly Arabs and Albanians. Italian diaspora has  About 20 million Italians (U.S. and Western Europe).

The urban population is 70%. Population density - 193 people. on  km2. Life expectancy is 77 years for men, 80 - for women. There is a significant outflow of labor in Western European internal migration from agricultural areas to the south industrial north, the country allocated a large flow of labor migration  from North Africa and Eastern Europe. Significant expenditures of GDP going to education, almost every major City University is. The biggest Italian cities: Rome, Milan, Naples, Turin,  Palermo, Genoa.

According to legend, founded on seven hills brothers Romulus and Rem in By 753 BC Archaeological data indicate settlement during the Bronze  Age (1500 BC). Here preserved medieval quarters (Trastevere), palaces and churches of the Renaissance and later times.

Today "Eternal City" is a major cultural and scientific center of the country. There are over 20 institutes and academies, engaged in studying the problem of fine arts, theater, music, cinema; Astronomical Observatory, National Research Council, National Nuclear Center (Club of Rome - known around the world research center that ob'yednuyuye greatest scientists of the world), over 25  libraries, opera, theater Elizeo, conservatory, founded in 1570  by others. Masterpieces of Italian painting and sculpture collected in Vatican Museums, Galleria Borghese, Capitol Museum. The most famous is the National Roman Museum, located in Terme Diocletian (306 was).

Milan, A city in northern Italy, Padanskiy Plain, an important economic and cultural center, leader of chemical (Plastic) and textile industry, machinery (Cars, machines, electrical), metallurgy, oil refining, light, food, printing, glass, pharmaceutical industry. Large banking center of Italy, the center of the fashion industry, one of the most major centers selling silk. Ferrari Board of Italian companies, Fiat, Epson and others, and most are in the Italian Stock Exchange Milan.

City (Mediolanum, from its location: "Media" - the middle, "Plan" - plain) was founded at the end of V or at the beginning of the IV. BC Celtic tribes (insubramy). Location of the city contributed to its development, as it passed through the road north. Milan famous museums, art galleries, theaters, monuments architecture schools. It is known all over the world Theatre "La Scala".

Genoa, north city, on the shores of the Gulf of Genoa Ligurian Sea. In ancient times - a settlement Ligure, won in the III. BC Romans, Genoa was one of the most important trading ports Roman state.

City vytyahnulosya more than 30 km along the narrow coastal strip  Italian Riviera and consume next to her small town (in west - Kornilyano Ligure, Sampyerdarena, Pelyi, Voltri, Sestri Ponente, in mountain valleys - Boltsaneto, Rivarolo, Pontedechimo) and  together with them forms a large urban area of

Italy is divided into industrial and agricultural north south of high unemployment. In the northwest of the country in the area  "Industrial triangle" Milan-Turin-Genoa concentrated 80% industrial countries. Innovation center "Novus Ortus," which aimed at lifting the economic development of southern Italy, is the largest  country technoparks. It is located in the south near the town Bari.

Italian economy produces high-quality consumer goods, mainly small and medium-sized enterprises. Italy also  has a large shadow economy that by some estimates makes up 15% of GDP country. Official debt of the country remains at 100% higher than the GDP.

GDP per capita is $ 31,000. GDP includes such  follows: 2% gives agriculture: 26.7% - industry, 71.3% - service industry. Italy in terms of economic development holds the 6th place in  world. Late 1990s, the processes of European integration, introduction of the euro caused a revival of the economy, stimulated  further development of SMEs.

In Fr. Sicily, Padanskiy plain and continental shelf Adriatic extract oil and natural gas in Sardinia and in Tuscany - peat and coal, ores, pyrite, Sicily  - Sulfur and potassium salts, in Tuscany - marble and granite. Notwithstanding availability of domestic energy resources, Italy depends on imports for 80%.

Industry. Leading the industry in Italy -  engineering and metal working, chemical and petrochemical, food and light. For producing steel and rolled products (Kornilyano, Piombino, Bagnoli and  Taranto) is the second largest country in Western Europe after Germany. On imported oil and gas (Genoa, Naples, Venice, Fr. Sardinia) based powerful oil refining industry makes Automotive 1.3 million passenger cars (the national company "Fiat" with the center in Turin), including racing cars (the company "Ferrari") mlyon motorcycles. Almost all plants are located in the north.

Italy - one of the world's largest producers of cotton and woolen textiles, shoes, high quality readymade garments and knitwear, furniture, jewelry, art glass and pottery. Textile industry based mainly in the north (Pyemont, Venice, Tuscany). By production of footwear Italy takes 2nd place in the world after China. 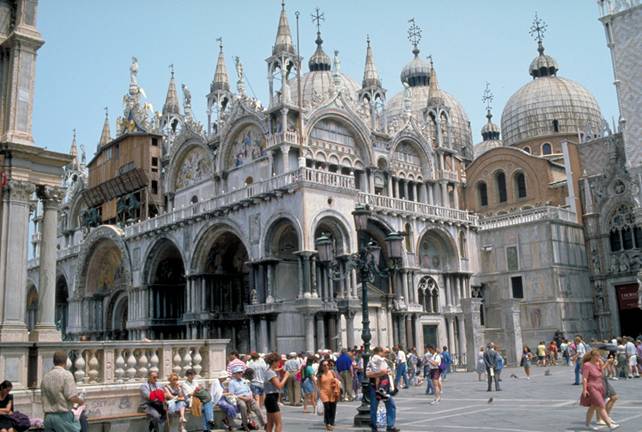 In the center of Venice

Develops "shopinhovyy tourism." It involves wholesalers of products which are manufactured by small and medium enterprises and individual consumers and Italian shoes clothes. Italy - the birthplace of banks in 67% of its settlements is banking institutions.

Agriculture. The government makes the country a lot efforts to enhance agricultural development south country. The distinctive features of this region is high unemployment, low income population and its significant outflow in the EU. In Italy There are over 3 million farms, most of them small. Level mechanization of agricultural work is considerably smaller than the corresponding  in other countries in Western and Central Europe.

Along with France is one country. The world leaders gathering grapes (90% of it goes to the production of wine) and grape production Wine (Region of Calabria, Apulia, Sicily). By collecting olives and citrus in  Western Europe, Italy is second only to Spain.

Stockbreeding developed throughout the north  - Within the mountainous, southern and central - on natural pastures. Bred cattle, sheep, pigs and poultry.

Interior passenger and cargo performs well branched  network of roads with total length of over 300 thousand km (second in Europe after Germany). In the north of the Alps is tonneli.  The country has 32 million users of Internet. 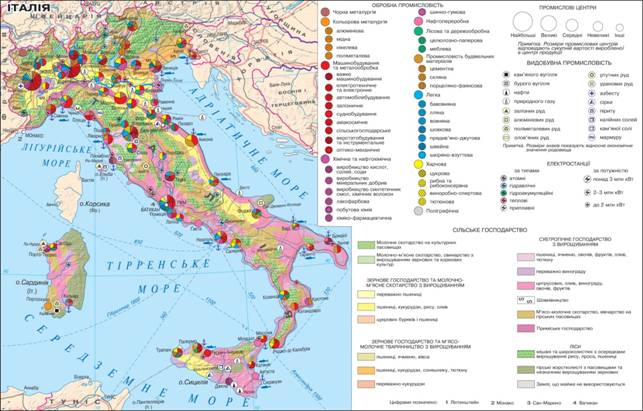