§ 5. Political and economic systems of the countries. Typology of states. (textbook)

§ 5. Political and economic systems of the countries

Remember that countries have the largest land area, and Most of the population.

2.    What does such indicators as gross domestic product?

POLITICAL SYSTEM. Political system of society called the set of relations of political subjects that are related by the nature of power and control society, organized the only normative value basis. Accumulated over thousands of years of experience political interaction within the state formed in a few basic systems in globally dominant political system is democracy.

Democracy - A form of government in state based on the recognition of people's source of power. Democratic form Board formed even in ancient Greece. But while the slaves and foreigners did not included the citizens, that the people of the country. The same is true of some medieval states, called democracies, but much of the society is attributed to the people, whose representatives were entitled to vote. So frequently used terms such as "slaveholding democracy" "Feudal democracy", "bourgeois democracy", "Socialist democracy" and so on.

In today's world rather often mix the concept of "democracy" (democracy) with its specific manifestation - a form of government, now the most common in countries with market and mixed economies, particularly in the U.S. and Western Europe. The main absolute power of a democratic government is elected, the division of state power into three branches - legislative, executive and judicial branches, subordinate minority majority, minority rights, the existence of political rights and freedoms.

Theocracy - A form of state government in which political power belongs to the clergy or head of the church. This term may look new, and though he has more than nine centuries. It is used in the first century. AD historian Josephus Joseph from Jerusalem. Classic examples theocratic form of government is the Vatican and Brunei. The elements present in the state theocracy rule Iran.

In our time totalitarian, rather neototalitarna government typical for Democratic People's Republic.

Authoritarianism - This form of rule in the state, when all or most of the power authority is concentrated in the hands one person or group of persons. When authoritarian role of representative bodies power is reduced to nothing or understated. Characterized by authoritarian rule for absolute monarchies (Saudi Arabia, United Arab Emirates), Military dictatorships (in different times: Argentina, Uruguay, Cambodia), Personal tyrannies (in different Times: Haiti, Nicaragua, Somalia) vozhdystskyh modes (Libya, Cuba).

The main features of a democratic society: freedoms - of speech, art, religion, language selection interpersonal communication, peaceful assembly and demonstrations, unions, organizations and political Parties are not prohibited by law; rights - to life, liberty and security, honest and objective in the trial in compliance with the presumption innocence; developed civil society, independence and impartiality of the court, a clear adherence to the principle of separation of legislative, executive and judiciary developed parliamentary institutions, strong local government, to depoliticize the security forces, civil, social and parliamentary oversight of security forces, universal, equal and direct suffrage right.

ECONOMIC SYSTEMS. Economic system is called a set of economic processes that occur based on the prevailing property relations in society and economic mechanism. The main role in any economic system plays with fields of production distribution, exchange and consumption. There are several main forms of economic systems: traditional, market, planning, mixed.

Market economy - A form of economy in which the product becomes a commodity produced and sold in the market. Random structure that allows buyers to come into contact with the seller called the market. The market economy allows people to buy what they want, and sell them manufactured goods. At the same time prices are determined the demand for goods and their quantity. Examples of countries with classic market system is Saudi Arabia, Bahrain, Kuwait. The modern market system has the following features: various forms of ownership of the economy based knowledge, an active state influence on the economy and social sphere, increased attention to environmental problems, humanization of globalization and world economy. 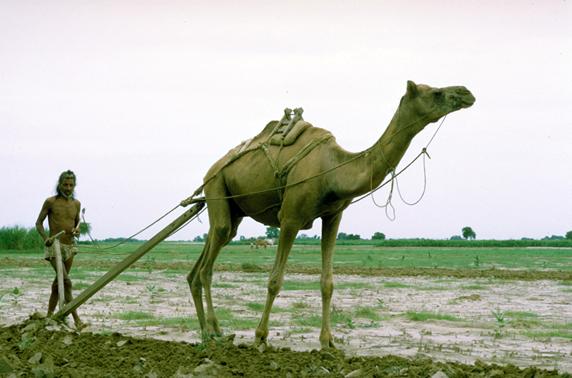 Mixed combines elements market and planned economies. It is typical for many modern States, examples of which is the United States, Russia, China, France, Sweden, Japan, United Kingdom.

The main forms of economic systems dominated by mixed, which absorbed most effective elements of market and planning system.

TYPOLOGY countries. Listening to international news, pay attention to the fact which is the state, who talk every day and many. It U.S., France, Germany, Russia, China, Japan, Great Britain, Italy, Poland, Spain, India. Less frequently mentioned Canada Brazil, Australia, Egypt. And there are countries, which you can hear and lifetime: Bhutan, Brunei, Belize, Rwanda, Cape Verde, Pitcairn or Saint Lucia. Information about them unless the agency can remember in the context of natural or social disasters, curious cases or emergencies. Why? The answer is simple: all right in the authority of the state, its role and significance in the modern world that formed based on many qualitative and quantitative characteristics, such as contribution to world civilization, population, territorial size, size natural resources, economic level, share in world production or providing services, labor productivity, the index human development, economic structure and many other indicators. According to them, there are various types of countries. 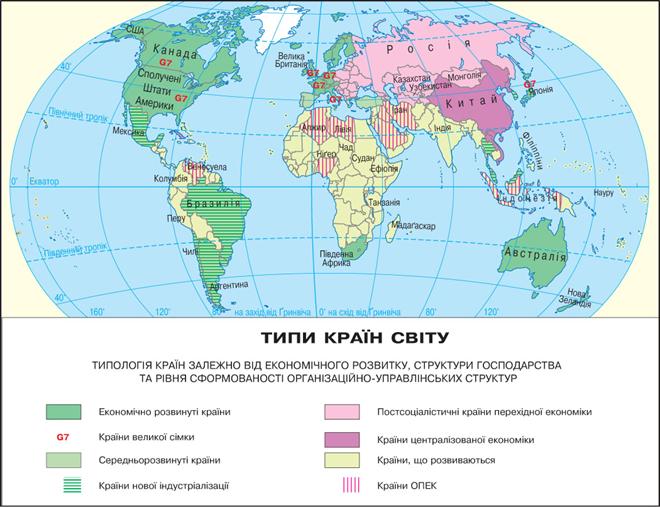 Often the basis of typology countries have data socio-economic development. Most important economic data are Gross domestic product (GDP), which is, as you already know the total value of all goods and services produced and implemented during the year in the country. Country's economic power is dependent not only the total GDP, but its value in per capita. These indicators allow to assess the level of socio-economic development.

В economically powerful States WWII size is 500 billion to 1 trillion dollars. USA. The countries with average economic power include those in which total GDP 100 - $ 500 billion. USA. In low cost countries GDP is less than 50 billion in this group are the economic "dwarfs", the annual volume GDP not exceeding 5 billion dollars. USA. This majority of small-area island countries and Butane in Asia Lesotho, Guinea-Bissau, Liberia, Zimbabwe in Africa. Ukraine But against the backdrop of world economic leaders essentially loses. By economic power it takes place in the middle of the fourth of ten world group of countries with average economic capacity between Nigeria and Austria. With a total GDP Ukraine yields U.S. more than 40 times Russia- In 6.5 times Poland - Twice.

Size of GDP per capita of the country - more objective measure. It enables to estimate the overall economic level development and concerned about "poor-rich" country. According to value of this index countries together in five groups:

Virtually all poor countries and the poorest - this country Africa and Asia (Fig. 20). Dozens of the world's richest heads Liechtenstein, in Europe. U.S. According to this data confirm the status of the world's leading nations.

According to the set of indicators, including GDP is a major, national income (the price of public product remaining after reimbursement of expenses), a formation management and its administrative structures, and given the correlation between the service sector, agricultural and industrial sectors economy, countries are divided into four groups: 1) economically developed, 2) development of post-socialist countries, 3) sotsial1stychni country, 4) country the development (or developing countries). Each of these groups includes countries that have as common features and significant differences.

To group of countries postsocialist Development include:

Biggest group (more than 100 countries) is a fourth - country towards the development of: Often called countries of "third world". Among They are distinguished: 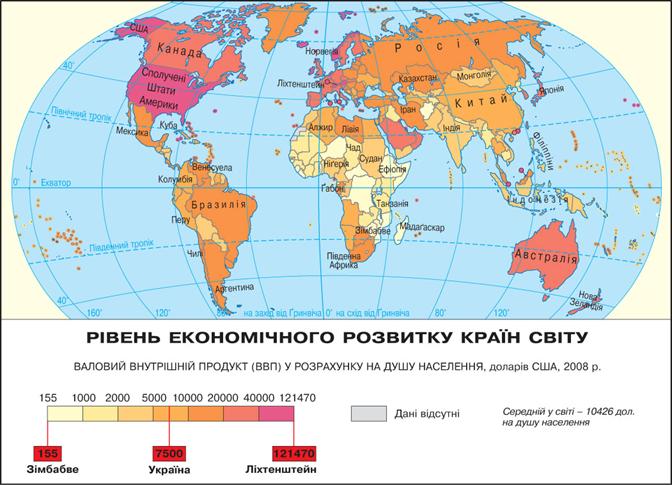 Map. The level of economic development of countries

In which regions are concentrated world's poorest countries?

2.    Name the regions where there is a country world.

3.    Which groups by GDP per one person belonging to countries in South America?

1.    Tell that distinguish the main political system of society. Which ones are predominant in the modern world?

2.    What are different market and planned economies? What forms economic systems prevailing in the world?

3.    What are the indicators of the country together in groups?

5.    Give examples of post-socialist countries.

4.    What subgroups are distinguished in the group of developing countries.