second half of 1919 was characterized by a sharp struggle in Ukraine between three forces: the Red Army and White Guard troops UPR. At mid-year most of Ukraine was controlled by the Bolsheviks. But their previous policy of "war communism" has caused indignation of the population and, consequently, affected the readiness of the Red Army who were at the front.

In May 1919 the White troops of General Denikin, who controlled the Donbass, Don, Kuban and North Caucasus, passed into the decisive offensive. Overcome the resistance of the Southern Red Army, they captured nearly all the Left-Bank Ukraine and moved on to Kyiv. While other parts of Denikin's army under the directive of June 25, 1919 rozhortaly offensive on Moscow. The only serious resistance army troops did Denikin N. Makhno.

Simultaneously on Right Ukraine against the Bolsheviks launched the offensive part of the UNR army.

happened after July 17 the Ukrainian Galician Army (UHA) and leadership under pressure ZUNR Polish troops leave eastern Galicia and crossed to the left bank, the Zbruch. According to the agreement between the governments of the UPR and WUFR UGA entered the army to continue the UPR joint struggle for independence of Ukraine under the motto "In Lviv through Kyiv". Joint army consisted of 80 thousand people, of whom 50 thousand were Galicians. Joint army launched the offensive in two strategic areas: in Kyiv and Odessa. In Kyiv attacked Galicia, and to New York - part of the UNR army. Originally developed to successfully attack and has entered Galicia August 30 in Kyiv. Simultaneously with the left bank of the Dnieper River in Kyiv to take part of the Volunteer Army under General Bredova. Trying to find understanding with Denikin army had no success, and Ukrainian units were forced to withdraw to Boryspil. Filing of Kyiv was equivalent to a defeat. This event became known as the "Kiev disaster. Ukrainian lost symbol Chelyabynskalezhnoyi state. The moral and psychological defeat and added other problems: between the Ukrainian and the Volunteer Army began fighting, while the Polish army captured Western Volhynia, Ukrainian army stripped the rear, the army struck epidemic typhus and other diseases and as a result, the amount was reduced by 70%.

first armed resistance ceased UGA, which came after separate negotiations on the side Denikinites. E. Petrushevych left for Vienna. Directory collapsed. Army Petliura some time resisted. Finding themselves surrounded, the remnants of the Ukrainian army switched to guerrilla fighting methods. Gen. M. Pavlenko Omelianovych-led forces raided parts of the UPR that went tylamy Denikin troops and Red Army (this raid went down in history as the first "winter campaign" (December 1919 - May 1920 )).

, Petliura of inner circle in December 1919 went to Warsaw began talks with Polish leaders on the recognition of the UPR and the joint struggle against the Bolsheviks.

Historians estimate different activities Petliura. Particular controversy aroused by his agreement with Poland. But despite this, Petliura go down in history as one of the UPR and the national liberation movement.

late summer 1919 Denikinites occupied almost the whole of Ukraine and its territory divided in three areas - Kharkov, Kiev and Novorossiysk. At the head of each was governor of unlimited authority. Denikinites Politics in Ukraine was held under the slogan of restoration of "Great Russia". Ukrainian national movement was proclaimed traitorous and suffered persecution. The name "Ukraine" was prohibited. Severe repression waited all who zapidozryuvavsya in opposition to the regime. The industry and the countryside became revive the old order: the businesses canceled all winning revolution in the countryside Updating landowner economy. With punitive detachments from the peasants confiscated buildings, equipment, livestock. Under the law of the harvest in 1919 the villagers had to give a third harvest landowners. Also introduced was the tax - 5 pounds of grain from each tithe to the needs of the army. Delays and evasion punishable by death. These orders led to an explosion popular discontent: workers' strikes and rebellions, the deployment of mass peasant movement (movement of guerrilla detachments N. Makhno and other atamans), which could not cope Denikinites. All Denikinites success at the front against the Bolsheviks were limited to nothing the complete collapse of their rear. Finally in October 1919, the Red Army inflicted retaliation for Denikin. After heavy fighting their main forces were defeated (horse enclosures skins and Mammoth) and the remains Denikinites the retreating early in 1920 entrenched in the Crimea. Denikin was to assume the responsibilities of chief. With the defeat of Denikin UGA in difficult circumstances and in February 1920 moved to the side of the Bolsheviks. Connection was named Red Ukrainian Galician Army (Chugai). 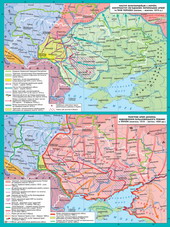 Oath of allegiance to the Directory. Kamjanetsky, August, 1919 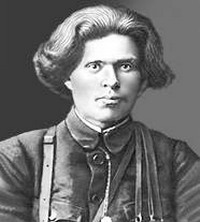 Meeting Makhno and riflemen near Uman. 1920 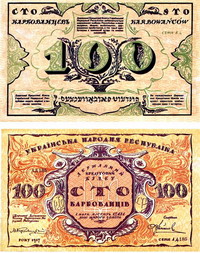 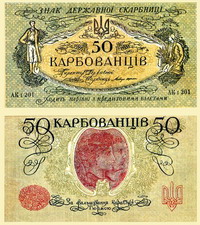 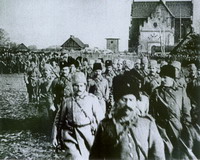 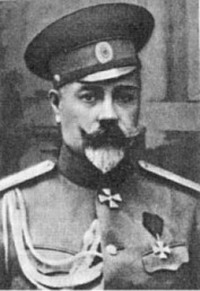 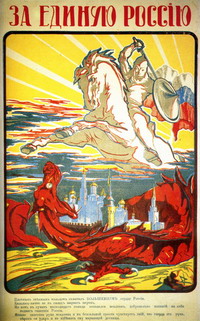 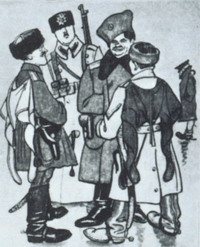 Before posting on the Denikin front 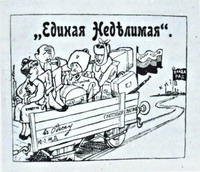 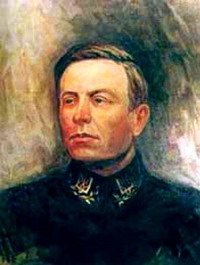 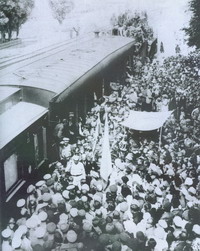