After the defeat of Denikin's war with Soviet Russia, according to the Polish leadership was inevitable. Attempts to normalize relations RSFRR failed. April 25, 1920 Polish troops launched the offensive on Soviet territory. The reason for the war have great power aspiration of Poland, which wanted to restore the Commonwealth in its borders "from sea to sea", ie, from the Baltic to the Black Sea. This state should have included Lithuania, Belarus and Ukraine.

invasion preceded the signing of the Polish forces and representatives of the People's Republic of Poland 21 -24 April 1920 the three conventions, which are called "Warsaw agreement". The Polish government recognized the right of the UPR independent existence, and Singapore and Chief, Petliura recognized by the highest authorities in Ukraine. Instead, Western Ukraine population of 5.2 million people had to remain within Poland. UNR troops with Polish troops were to participate in Soviet-Polish campaign, which resulted in expected to resume sovereignty over UNR Bolsheviks captured areas of Ukraine.

first stage of the Soviet-Polish War (April - May 1920) was held successfully in Poland, whose troops till May 7 along with the UPR and UGA teams took Zhitomir, Vinnitsa, Kyiv and other cities. With the triple advantage against Soviet divisions Southwestern Front, Poles hoped and Bolshevist revolt in the rear of Soviet troops.

Polish occupation regime immediately aroused dissatisfaction. Poland were removed to industrial equipment, goods and raw materials, and most importantly - Updating landlordism. Return landowners and land estates accompanied by repression of the Ukrainian population and caused a surge of peasant uprisings.

In mid-May 1920 situation on the Polish-Soviet front has changed in favor of the Soviet side. To fight the Poles Soviet command transferred most combat-ready divisions. The plan involved the counterattack of the main blow in Belarus by the Western Front (Commander M. Tukhachevsky) towards Warsaw and auxiliary forces of the South-Western Front (Commander A. Egorov) at-Brest. Counter-offensive of the Western Front, which began May 14, failed. May 26 launched the offensive South-Western Front. June 5, 1 st S. Budyonny Horse army broke through the Polish defenses, June 7, took the red Zhitomir and Berdichev, June 12, came to Kyiv. By the end of June, military operations were moved to the territory of Western Ukraine.

July 4, 1920 began a new offensive of the Western Front. In late July the Red Army entered the territory of Poland. This development troubled governments of the Entente. July 22, 1920 the Polish government proposed to Moscow to begin negotiations. The Red Army stopped the attack. Now it hopes the Bolsheviks moved the world revolution, as evidenced by a Polish revolutionary committee, headed by Yu and F. Dzerzhinsky Marhlevskym. Soviet troops were on pistupah to Warsaw.

But the Soviet command overestimated their capabilities. Back areas the Red Army did not succeed in advanced parts, two Soviet fronts advancing in different directions (West - in Warsaw, Southwest - the Lions) Soviet offensive has not led to increased class conflicts, but rather consolidated Poles, France has provided substantial assistance to Poland ammunition and equipment.

August 27, 1920 Polish troops from the region of Lublin attacked in the flank the west front, putting him to the brink of total defeat. Began a general retreat of Soviet troops. The front stabilized in Ukraine in line Korosten - Zhytomyr - Berdichev. Both sides were bleeding. October 12, 1920 in Riga truce was signed between Poland and Soviet Russia. It meant a break from the People's Republic of Poland.

Ukrainian troops, whose number grew to 35 million people, continued to fight independently. But forces were unequal. In November 1920, Soviet troops drove part Petliura Zbruch to the river, the latter were forced to cross the occupied Polish territory. There Ukrainian troops were interned.

March 18, 1921 between Poland and Soviet Russia, signed the Peace of Riga. By signing the peace has been a delegation of USSR. Poland recognized the existence of SSR. Poland went to Kholm, Podlasie, Western Volhynia and Polesie West. Remained in Poland and eastern Galicia.

Thus, the Peace of Riga had to Ukraine even heavier impact than the Warsaw Pact. Organized regular Ukrainian troops fighting for an independent Ukraine ended their defeat. Ukraine was once again divided between the neighboring countries: Romania, Czechoslovakia, Poland and Soviet Russia. This status of Ukraine, one of which was under foreign occupation, and in another vstanovyvsya antinational totalitarian regime, recognized by the international community and remained until World War II.

early in 1920 the Entente ships evacuated to the Crimea remains of Denikin troops. Crimean group headed Whites Cossack Corps commander Baron Vostochny. Pereformuvavshy troops, and making changes in the ideology of white movement, he began the offensive. At the end of June 1920, using the fact that the main Red Army forces were engaged in war with Poland, P. Wrangell conquered Northern Tavria, southern Katerinoslavshchina, creating a threat to the Donbass. All attempts to make a landing on the Taman peninsula and raise the Don and Kuban Cossacks in Bolshevist uprising were unsuccessful. Soviet commanders, concerned about these developments, in August decided to create the Southern Front, headed by M. Frunze. These were thrown additional forces, but they were enough to defeat Mr. Wrangell.

In order to attract additional forces in September between the government and the USSR Makhno, the agreement on joint action against Vostochny. Makhno put forward political demands: to give autonomy Guliaipolskiiy District, to allow propagation of anarchist ideas, to release from prison and Makhno anarchists and help weapons. USSR Soviet government after agreement with Moscow to acquiesce to these demands. As a result of the agreement Red Army received well-equipped mobile (major fighting force Makhno were several thousand machine-gun tachanok) ally in the conquest of the Crimea.

August 7th Red Army passed to the counteroffensive. Near Kakhovka perepravylasya it through Dnepr and captured the base which was a threat to the rear and flank troops Wrangel. All attempts to abolish the springboard with no success. Unsuccessful raid ended with the Whites on the Right Bank and the breakthrough in the Donbas. In mid-October White Guards kept the defense on all fronts. October 28 Red Army launched a decisive attack, which ended utter defeat of Wrangel's army group in northern Taurus. White Guards lost 50% of manpower and 40% of the weapons. Driven into the Crimea, they have constituted a serious threat. Politburo of the CC RCP (b) decided that all the winter to complete the rout P. Wrangel.

Red Army numbered some 100 thousand soldiers. She resisted 28000th group that defended Perekops'ko strong fortification on the Crimean isthmus. Red Army Command decided to attack through Sivash around forts, and troops of the Turkish assault on the casting shaft. During the 8 - November 11, 1920 the price of white defensive positions were taken significant losses. November 13th Red Army entered in Simferopol, November 17 and all of the Crimea was in their hands. Remnants of the White Army and the refugees (about 150 thousand) hastily evacuated the ships to Turkey and Bulgaria. But about 300 thousand civilian and military could not or would not leave home. They have been subject to reprisals by the Soviet authorities. A total of 40 killed and 150 thousand people.

After the defeat of Wrangel P. Soviet command decided to finish with Makhno. November 20, were arrested and later shot by the commanders of the Crimean group Makhno army Karetnikov S. and P. Gavrilenko. November 25 began operations to destroy parts of Makhno in the Crimea. Near Evpatoria they were surrounded. But the easy victory could not win. After a brutal battle units Makhno managed to escape from the Crimea, but when they Tymoshivka faced with significant parts of the Red Army and defeated. Only a few managed to break Makhno, and then they are connected to the insurgency led by remnants of the MPRP, which burst from the environment around Huliaipole. In the fight against insurgents was thrown 2 / 3 of the Southern Front forces. Repression against the rebels and the population that supported them, intensified the insurgency. In March 1921 under the command of Makhno was already 15 million people. And in general in Ukraine there were almost 40 thousand rebels. The culmination of the peasant Anti-Bolshevik movement was the summer of 1921 to quell uprisings in Ukraine has focused almost one million Red Army soldiers. Ultimately, the insurgency through repression and the threat of famine was to decrease. N. Makhno with a small group of supporters in September 1921 he went over the Soviet-Romanian border, and then moved to France.

After the defeat of UNR troops to fight remnants of the Bolsheviks were interned by order of the Polish government in POW camps. Meanwhile in Ukraine rozhortavsya massive peasant insurgency (Podolia, Kiev region, Ekaterinoslavschine, Poltava). In October 1921 the command of troops and UPR Povstancha team developed a plan to help rebel movement to raise the population nationwide Bolshevist uprising.

to put the plan into internment camps secretly Polish administration was established Insurgent Army. It consisted of three groups: Volyn (about 800 fighters under the command of General J. Tyutyunnyk), Bessarabia (300 soldiers, commanded by General A. Guly-Gulenko) and Podolsky (400 fighters under the command of Lieutenant-Colonel M. Paliy, and later - Colonel C. Black). General Command carried Tyutyunnik Yu. All three groups broke through the Soviet border in different places and came to the transaction. The first group broke Huloho-Gulenko, but to fulfill its mission failed and had to leave the territory of Romania.

Podolsky group, broken by near the city of goose (Ternopil), was fought all the skirts and went to the area Borodyanka (60 km from Kyiv). But then was forced to stop its progress. Unable to join a group of Volyn. Turning back to November 29, 1921 she crossed the Polish border.

Volyn raid group set off for November 4, 1921 November 7, it is already captured Korosten. Further promotion of the group was stopped by the superior Red Army. Retreating under pressure from the Soviet cavalry under the command of G. Kotovskoho group were surrounded. November 17th was the decisive battle. The rebels were defeated. Some participants (359 soldiers) march captured and were shot. Another part (150) managed to break the encirclement and withdraw to the territory of Poland.

Before sending the Polish front 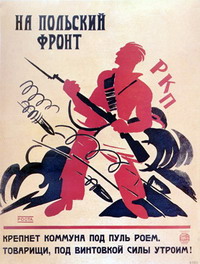 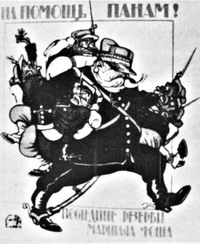 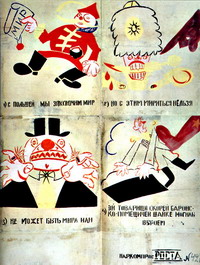 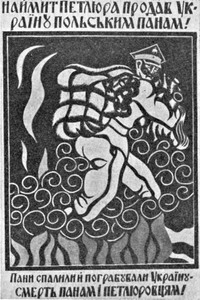 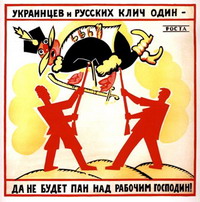 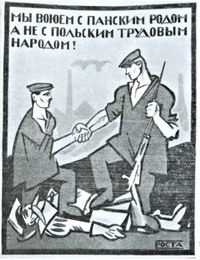 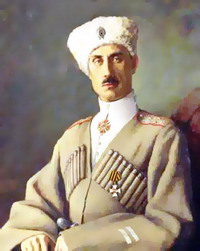 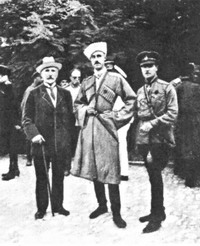 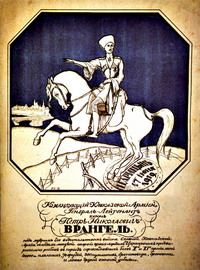 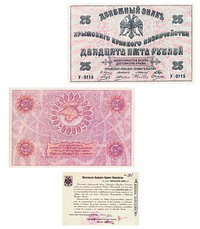 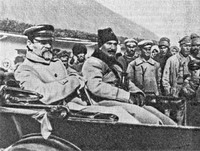 M. Kalinin and S. Budyonny vranhelivskomu on the front. 1920

The signing of the Polish-Soviet peace treaty. Riga, 1921 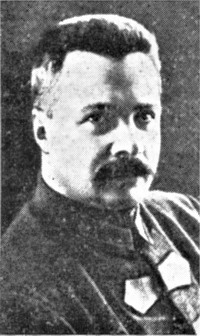 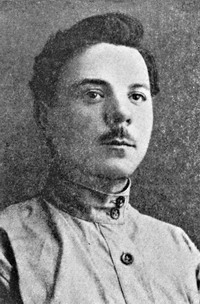 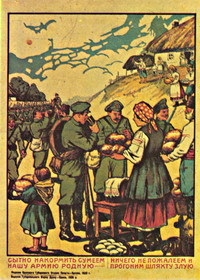 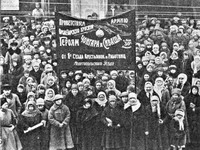 Nestor Makhno and his family 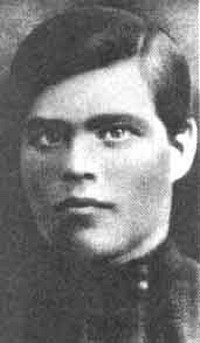 Nestor Makhno in their youth 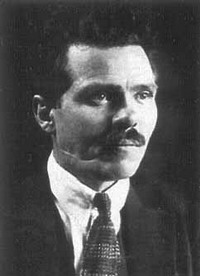 N. Makhno and his wife among Ukrainian immigrants in Poland. 1922 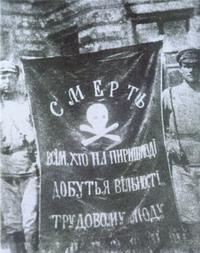 The flag of the Anarchists 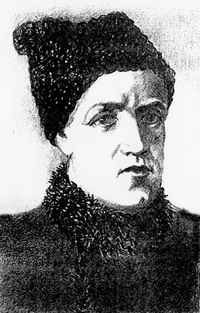 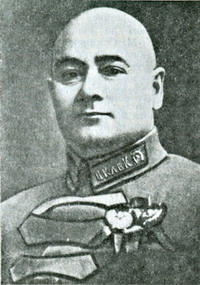 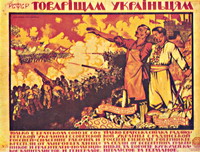 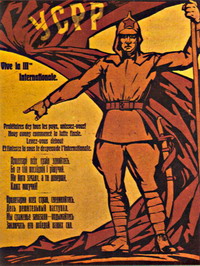 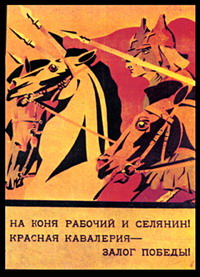 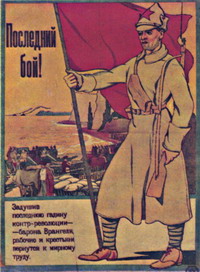 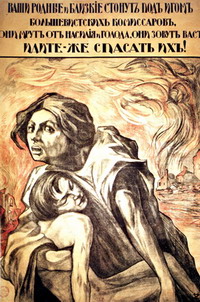