During the years of civil war territory of Ukraine has suffered major destruction. Loss of Ukraine estimated at 10 billion rubles. With 11 thousand enterprises in 1921 were able to reopen the 2,5 thousands greatest losses suffered Donetsk coal basin, metallurgical, engineering, sugar, salt and other industry.

permanent change of government in Ukraine, requisition, extortions led to the ruin of agriculture. A policy of "war communism", which it conducted the Bolsheviks, caused deterioration of the socio-economic situation of farmers. 1920 prodrozkladka in Ukraine was performed at 40%. In Ukraine was imposed excessively high food tax, of which one third (28.5 million pounds of grain) were taken to Russia. The economic problems of famine in 1921-1923 he added, which fell almost 15% of Ukraine's population (3.8 million).

difficult for the Soviet regime remained the political situation. Most of Ukraine was seized peasant rebel movement.

In March 1921 the X Congress of Russian Communist Party (Bolsheviks) declared course to host the New Economic Policy (NEP). Ukrainian Central Executive Committee and the USSR Sovnarcom received a number of orders designed to concretize the tasks of NEP in Ukraine. Their cut was changing the layout of food to the food tax. Now the peasants are not excluded all residues, and the preset minimum tax. Pay prodpodatok, farmers were able to sell surplus production. The government temporarily waived the creation of collective farms. Quickly reviving cooperation. It has captured almost 85% of farmers. NEP in the country yet. 1927 in Ukraine treated 10% more land than in 1913 If 1917 were the main plots of land in the hands of landlords and kulaks, the NEP during the years of Ukrainian village was largely serednyatskym, vydilylys and wealthy farmers, among whom were many former Red Army, Red guerrillas, active struggle for Soviet power.

existed in Ukraine and the system of collective farms - farms and communities. Created their mostly poor, rural communists and Komsomol members. However, collective farms were united only 1,2% of farms and occupy 1,4% of land area.

spring 1925 sown area in Ukraine amounted to 95% of the level of 1913, and gross grain yield reached figures over the last prewar years.

in the industry selected the former owners back in 1917 after a small production, encouraged foreign investment. In Ukraine, a huge number of private institutions. Allowed to set up their own factories and plants, take on lease previously nationalized enterprises.

During the NEP has increased the role of commodity-money relations. State enterprises were transferred to cost accounting. Likvidovuvalasya equality in pay, which is dependent on the quantity and quality of products, as well as fuel, raw materials, rationalization of production.

important role in the rise of the national economy played a lead in the country monetary reform (October 1922). In turn the bank entered a ticket, which totaled 10 gold ruble - "guinea". First, the new currency used for transactions between state enterprises and in 1924 it was possible to go to the "guinea" in full.

Bolshevik leader Vladimir Lenin argued that the NEP will lead the country out of crisis, and Soviet authorities only stronger, because all the commanding heights of the economy remain in state hands. Large companies, banks, transport, foreign trade did not change ownership.

Rebuilding industry began with the transfer of existing plants and factories in economic calculation. To resolve the economic issues combined companies on a sectoral and territorial and sectoral - in trusts. Trusts first appeared in autumn 1921 as in heavy industry (Donugol "," Pivdenstal "," Pivdennorudnyy Trust ") and lightweight (Tekstyltrest", "Shkirtrest", "Tsukortrest). Top 1922 Ukrainian Council of National Economy subject of 24 trusts, which brings together about 450 enterprises of all sectors.

Communist Party tried to use for building the economy labor enthusiasm of the workers and peasants. Voluntary work became popular and nedilnyky days of wealth, etc..

City residents experienced significantly positive impact of the NEP, which quickly emerged in the process of denationalization of trade and industry, the formation of a considerable number of new, which stimulated economic activity of the population, especially small producers. In the village were commissioned tens of thousands of oil mills, different types of mills (steam, water, windmills), enterprises for the production of sausages, smoked, various marinades.

Despite difficulties vidbudovchoho period 1925 - 1926 in most industries Ukraine has reached a level of 1913 (This is particularly true of light and food industry).

Advances made to realize the reconstruction plan DEELRO (RUS HOЭLRO) (electrification of the country), which was adopted in 1920 it was decided to start construction of the Dnipro, the largest hydroelectric plant in Europe. And in general in Ukraine were built 50 plants, including Kharkiv, Lugansk, Poltava, Donetsk, which exceeded the plan by 2 times.

However, the NEP policy not trailed by a political change. Republic still had formal sovereignty and dictated from Moscow to perform the task. No changes occurred in party building. Communist Party of Ukraine remains one of the detachments of the RCP (b).

attempts of the opposition of the Ukrainian Communist Party (UCP) to unite with the CP (b) create an independent organization and ended up dissolving the UCP.

NEP and had political implications. He meant the failure of policies of war communism and the need to stimulate "the Bolshevik onslaught. The gradual revival of economic life, the expansion of commodity production by small entrepreneurs or nepmans led to the reconciliation of the Ukrainian peasantry with the Bolshevik regime that promoted its establishment in Ukraine.

Kyiv in 1928 View of the Separation

Homeless at the Kiev station. 1921 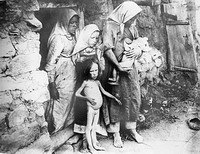 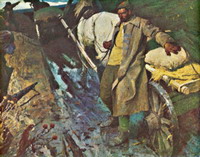 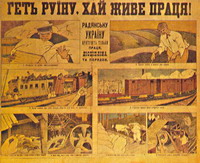 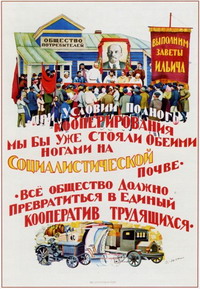 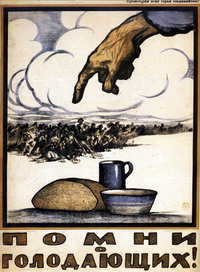 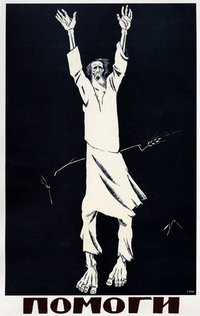 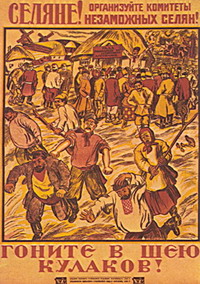 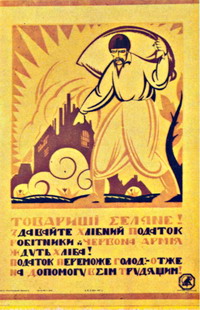 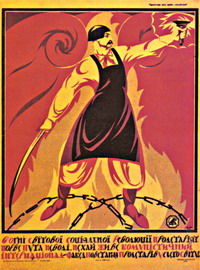 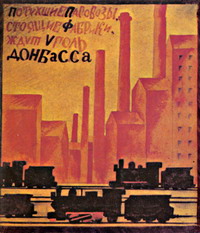 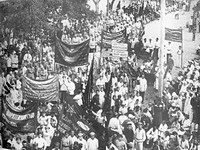 Rebuilding the railway bridge across the Dnieper. 1920 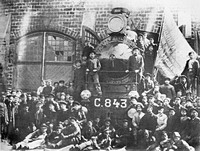 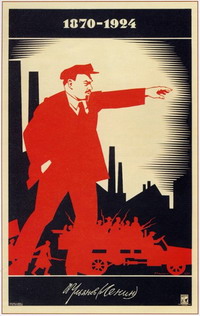 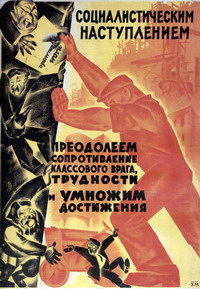 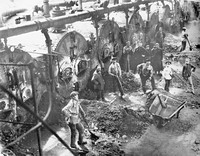 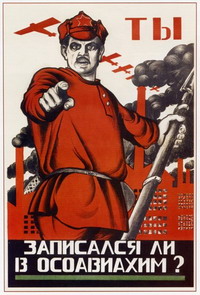 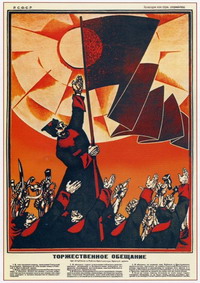 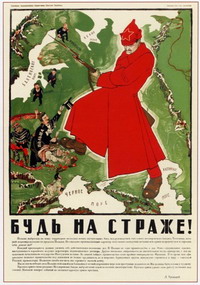 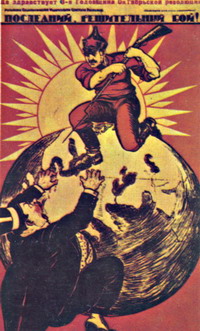 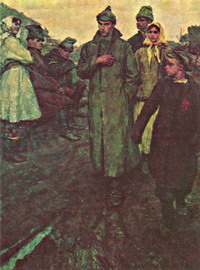 First Komsomol in the village. From paintings V. Chekanyuka. 1958 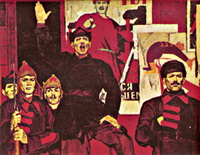 Commissioner. From paintings of V. Tokarev. 1967 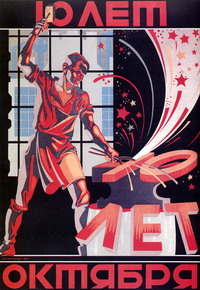 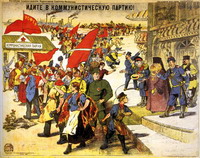 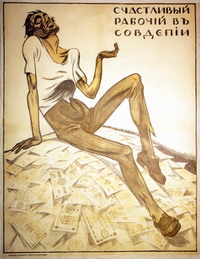