right bank and Left Bank UKRAINE IN 60-80's of the XVII century.

Damian Mnohohrishny came from a peasant family from the town of Carp in Chernihiv. Pokozachyvsya during the National Liberation War, during which a school organizational skills: organization took care of Cossack units, providing them with weapons, ammunition, training young military affairs and so on. He participated in many battles.

acting hetman was short-lived, becoming the sovereign ruler of the Left mace. This happened after Peter Doroshenko autumn 1668 with the army left the Left Bank, and Siversky (Nizhyn and Chernihiv) moved Muscovite army led palatine Romodanovskym. Mnohohrishny situation was complicated as Doroshenko could not send help. Pressure pro-Moscow ruler Mnohohrishny forced to resort to negotiations with the tsarist government.

Since March 1669 - Left-Bank hetman. In March 1672 the general officers secretly brothers caught in Mnohohrishny Baturinskoy castle, accusing them of friendly relations with Doroshenko and the king of treason and sent to Moscow. There they were subjected to brutal torture and sentenced to death. When the cat is already going to enforce the sentence, the death penalty changed the life sentence of exile. Together with Demian Mnohohrishny were deported to Siberia by his brother Colonel with his family, wife Nastya, sons Peter and John, daughter Elena. After 15 years of former hetman retired military service and served in East Siberia. Were accompanied by Russian diplomats who signed the first Russian-Chinese agreement (1689), was active in the exploration and settlement of Siberia. Late in life postryhsya monks. He died about 1707

John Samoylovych came from a family priest. He graduated from Kiev-Mohyla Academy. Spiritual his career is not attractive, and he joined the Cossack army of left-bank Ukraine. Educated and capable young man, received officers' ranks, soon took over as the acting colonel of the regiment of Good Friday. He was also captain Krasnokolyadynskoyi hundreds of Chernigov Regiment, and Chernihiv colonel. By Hetman Mnohohrishny held the post of general judge Left Bank Hetman.

Peter Doroshenko was born in 1627 was Chyhyryn grandson Michael Doroshenko - hetman of Zaporozhye, which were famous march to the Crimea in 1628 and in Moscow during the Troubles. Father Peter Doroteusz was a Cossack colonel. Peter Doroshenko received a good education, learning, probably at Kyiv Mohyla Academy. During the National Liberation War served as Pryluky colonel, was one of the youngest associates Khmelnitsky. On life after the resignation of Peter Doroshenko, Hetman remained little evidence. It is known that shortly after the loss of the Hetman's mace, he moved with his family on the Left Bank, where the consent Samoilovych settled in the town Sosnica. In March 1677 by order of the king's government came to Moscow. Remained in exile until his death, and no request is not assisted his direction back home. Died November 9, 1698 in the village. Yaropolchomu near Moscow.

To get rid of dependence

main sense of our own Peter Doroshenko saw in consolidating his power on the Right Bank and the gradual unification of all Ukrainian lands into one state.

This prompted However, secure power

All this led to return to the Right Bank Doroshenko.

By Gluhovskom sexes , which consisted of 27 items,

some concessions from Moscow were caused by its desire to prevent new demonstrations of Cossack resentment.

Speaking against the decisions This caused discontent

16-17 June 1672 in a Cossack Dibrova between Konotop and held Putivl General Military Council. There, with the consent of the Moscow Prince Gregory was elected hetman Romodanovskoho General Judge John Samoilovych.

characterized 15 years of Hetman Ivan Samoilovych was his desire to create a state with strong aristocratic Hetman's power.

Despite the attempts of officers

bright feature of Hetman Ivan Samoilovych, the relative stability of life in Left Bank Ukraine was the revival of the fallen during the Ruins of cultural life.

Samoylovych In foreign policy, focusing on Moscow and hostile attitude to Poland and Turkey, was opposed to Moscow-Polish agreement on the basis of division of Ukraine.

sought understanding of the Moscow State and Hetman of Turkey and the Crimea.

Buchatskiy agreement did not bring the desired peace Right Bank, as Poland is not going to abandon the Ukrainian lands lost and looked over to restore their confidence. However Muscovy Buchatskiy perceived as contract repudiation Poland Human Right Bank Ukraine.

This meant the state association of both parts of Ukraine under the same mace. However successful this event is not named because it led to Turkish aggression that results in the Right Bank of the population exposed to more suffering and misery.

price of extreme cruelty Right Bank was returned to power under Doroshenko.

center of military confrontation between the two former Hetman Hetman was the capital Chigirin.

So when Turkish troops invaded the city, there was a blast. Chigirin into a ruynovysche. Reflecting the fierce onslaught of the Turks and Tatars, United Muscovite-Ukrainian troops went to the Dnieper.

Power Hmelnychenka extended only wasted skirts. There he ruled, but failed. Turks beheaded him in the heater at the end of 1685

War 70's between Muscovy, on the one hand, and Turkey and the Crimean Khanate - on the other, for possession of land right-bank Ukraine culminated in the signing Bakhchysarai January 13, 1681 peace treaty between these countries .

According to this agreement:

May 6, 1686 in Moscow between Poland and Muscovy, signed the new contract - "eternal peace".

enclosing the "eternal peace" with Poland, Muscovy joined the states that fought against Turkey and its vassal - Crimean Khanate.

Commitment to anti-Turkish coalition - Holy League consisting of Austria, Venice and the Commonwealth - as well as their own plans, which foresaw the elimination of the Turkish-Tatar possessions in the Black and Azov seas, and a future exit to the Black Sea, prompted Moscow before the war.

Golitsyn ordered the army to turn back. 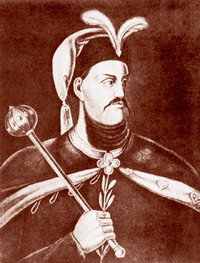 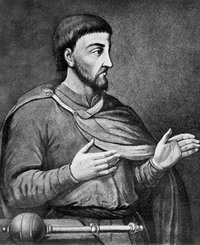 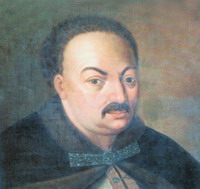 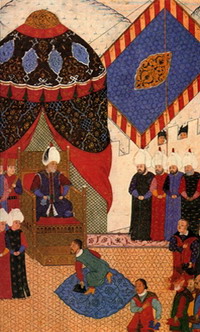 At the reception at the Turkish sultan 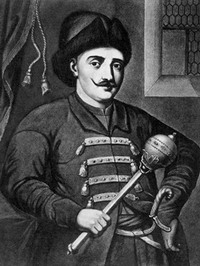 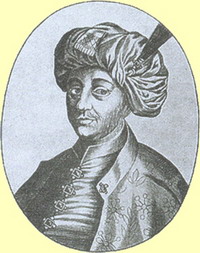 The siege by the Turks Pochaevskoy laurels 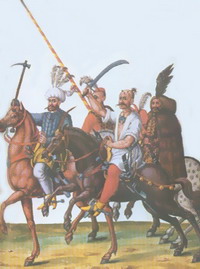 Siege of Vienna by the Turks

Polish King Jan Sobieski in the battle with the Turks 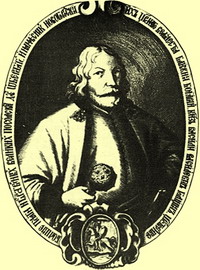