LIFE AND COMMERCIAL political system Left Bank Hetman and Sloboda UKRAINE In the second half XVII.

During the second half XVII. Russian kings intensified attack on Ukrainian statehood. This could not but affect the administrative-territorial structure. His authority in Hetman tsarist government carried through the Ambassador's commandment. During 1654-1662 he worked in his office stock of Little Russian affairs. In 1662-1722 he operated a special commandment of Little Russia. These institutions closely followed the activities of military and administrative authorities Hetmanate. Monastic Little Russia intervened in the election and the new Cossack Hetman, supporting some candidates and depriving the government of others; gathering information about the political situation in Ukraine, even resorting to such dirty methods as the denunciations; undertook direct management of rulers in Ukrainian cities, etc..

So during the second half XVII century. along with the Left-Bank Hetmanate put another Cossack region - Sloboda Ukraine.

Administrative division of the Left Bank Hetman and Sloboda UKRAINE

remained unchanged since the National Liberation War. At the end of XVII century. the Left there 10 bands , who were both administrative and territorial units and the military.

formed five Cossack regiments - Ostrohozkyy, Kharkov, Sumy, and Ohtirsky Izyumsky . These shelves, as in Hetman, were not only military but also the administrative and territorial units. The shelves were divided into hundreds. Colonel of the regiment led the regiment officers. Post colonel was elected . He headed the regiment administration, argued a court ruling handed settlers free land, and commanded the regiment during the campaigns.

colonels elected for life. In addition, Sloboda Ukraine happened often inherit the post of colonel. This stems from features colonization of new lands: Colonels were usually leaders of immigration groups. They had an extraordinary reputation for actually were the founders of the regiments, unlike Hetmanate.

power in the Left Bank Hetman and Sloboda UKRAINE

When the National War Ukrainian society has undergone great changes.

It was determined Part

In the Orthodox Church

Therefore With the support of Moscow

subordination of the Ukrainian Orthodox Church Moscow Patriarchate heavy defeat Ukrainian liberation movement - as of 1686 the church no longer provided ideological support in the struggle for national independence of Ukraine, and vice versa - has gradually become an obedient tool of aggression policy kings, becoming a means of Russification of Ukrainian, depriving them of the national public idea.

The economic life and political structure of the Left Bank Hetman and Sloboda Ukraine in the second half XVII. 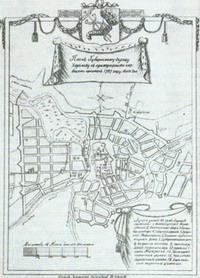 Map of Kharkov in the XVIII century. 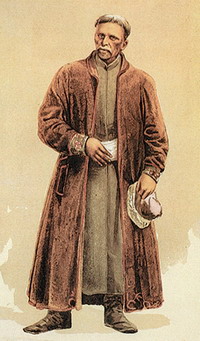 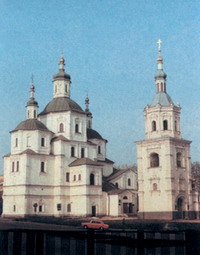 Church of the Resurrection in the center. Built in the early XVIII century. Siamese expense colonels Gerasim Kondratiev and his son 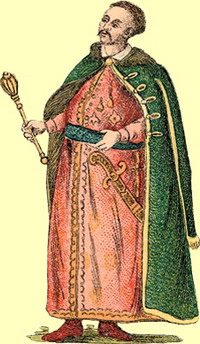 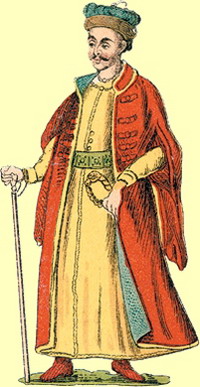 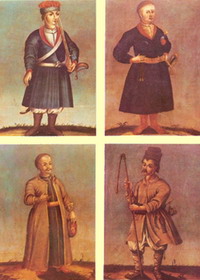