EUROPE ON THE EVE OF THE FIRST WORLD WAR (compendium)

the early twentieth century. relationship between military-political world's leading nations - the Triple Alliance (formed in 1882) and the Entente (1907) dangerously strained. Both units pursued aggressive goals and strive for world domination. Late XIX - XX centuries. was in full cry of many thousands of weapons and creating armies. Military expenditures exceeded half of public expenditures.

of war initiated by the ruling circles of Germany and Austria-Hungary, while other countries pursue specific aggressive goals.

In turn, England claimed the German colonies, the Turkish possessions in Mesopotamia and Palestine, demanded greater influence in the Middle East and the Mediterranean. In the interest of England was to undermine the economic power of Germany and its growing role in world trade. France intends to return Alsace and Lorraine East, picked her up by Germany in 1871, to capture the rich coal basin and Saarskyy Rhineland of Germany, the Turkish capture of Syria. Economically weaken Germany and Russia prefer. In addition, Russian Tsarism pursued strategic objectives - control of the Straits of Bosporus and Dardanelles, to break the German and Austrian influence in Turkey and the Balkans, and most importantly - expand its influence in all Slavic countries.

most hesitant in defining their claims Italy. As an ally of Germany and Austria-Hungary, Italy still prorahovuvala where it expects a greater profit. Since the war it waged protracted negotiations with the two warring parties, after all, the Entente countries promised her more territorial acquisition. England was ready to provide a large loan. This eventually led to Italy's transition toward opponents in Germany.

Thus, the war that imminent, had invasive nature of the part of both blocks.

reason for the First World War was the Austro-Serbian conflict. June 28, 1914 Serb nationalist Gavrilo Princip, a member of a secret organization "Mlada Bosna", which fought for the unification of all South Slavic peoples, killed in the Bosnian city of Sarajevo heir to the Austrian and Hungarian throne Franz Ferdinand. Archduke was chief of the army of Austria-Hungary and came to Bosnia to military maneuvers.

July 23 Austria-Hungary delivered an ultimatum to the Serbian government, which violated the sovereignty of the latter. In case of deviation from the requirements of Serbia, it threatened to break diplomatic relations and war. Big State took the fence. Fixed term of Serbia announced its agreement to accept the ultimatum. The exception was the item which was part of the Austrian police in conducting investigations in the territory of Serbia. This was enough to threats had been made. In late July, the Austro-Hungarian troops invaded the territory of Serbia. Began artillery bombardment of Belgrade.

EUROPE BEFORE THE FIRST WORLD WAR

A cartoon on the political situation in Europe 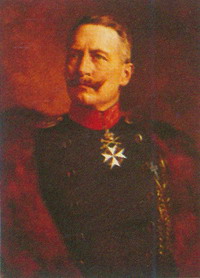 Caricature of aggressive plans of Germany. 1913 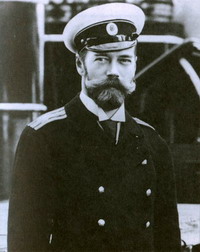 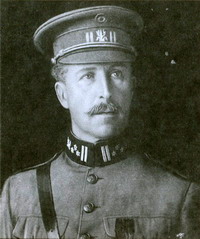 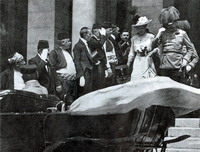 Archduke Franz-Ferdinand and his wife. Sarajevo, 1914 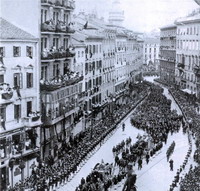 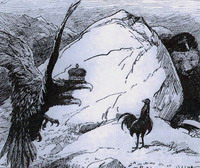 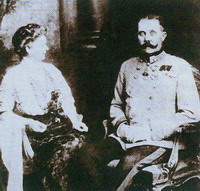 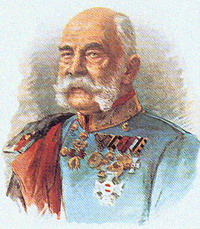 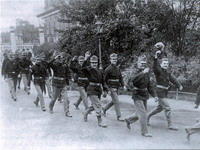