Since most agricultural products is one commodities, the prices on it are low. Therefore, industry needs a strong  government support. Such assistance is constantly providing developed countries. For example, support for agricultural producers is a most significant items of expenditure in the budgets of the EU, USA.

Agriculture occupies an important place in all sectors without exception of countries. For a large group of developing countries, it is the basis economic system. His role in countries with significant populations (China, India, Indonesia), because agriculture guarantees food, respectively, and strategic security. In developed countries, share of agriculture in GDP is low, but it remains an important source of revenue.

Starting with 60 years of the twentieth century. in some developing countries, was the so-called "green revolution", which covered the range measures that eventually allowed to raise rural low- economy to a modern level. This applied also to view property  ground. Land, who was in public ownership or possession peasant communities, passed into private ownership. Retrieving land private property, a farmer got to lay the ground at the bank. Banks have money to give farmers loans for acquisition agricultural machinery and fertilizers. Of the costs of implementation "Green revolution" took the state, such as the implementation of expensive programs for land development, agricultural development machinery, mineral fertilizers and means of combating pests. On the budget was set large breeding centers breeding new varieties of crops and breeds of domestic animals. Some of them have gained international recognition - in Mexico (developing new wheat and corn), Philippines (rice output) in Colombia (Tropical fruit).

The modern world agriculture is difficult to imagine in isolation from industries that serve it. Their organizational association found reflected in the formation agroindustrial complex (AIC).  Formation of a single complex of different sectors related to agriculture allowed to significantly reduce costs and dramatically improve the production process.

APC have 30 years of the twentieth century. in the USA and was a response agricultural businesses in the Great Depression 1929-1933, after World War II and before the end. process of agriculture has captured all  developed countries and some developing countries. But today AIC has developed a few countries.

The structure of agriculture into three components:

In the U.S., where agriculture has reached the highest degree of maturity, the ratio between components such as a percentage - 14:13:73. This suggests a minor role Agriculture in the structure of modern agriculture. Currently work agricultural products without the presence of highly related areas virtually impossible. 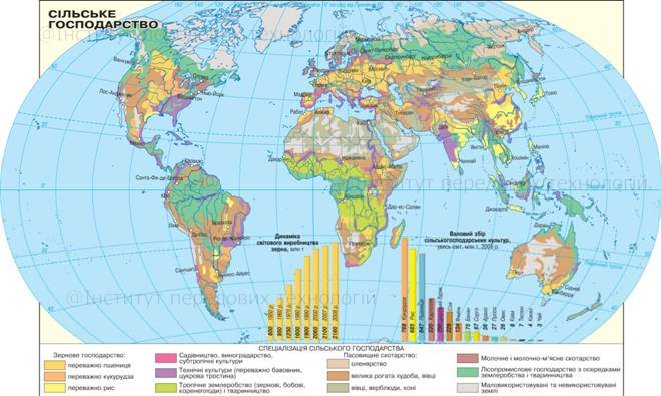 The leading group of crops are cereals. They cover about half of all arable land. Different types of crops  can be grown in all without exception natural areas, where possible in all crops and crop rotations, which is important for crop production. With the optimal combination of proteins, fats and carbohydrates are zernvi important food and forage crops. In addition, production grain effectively - to grow a quintal of grain is consumed more than 1 man-hours of labor.

The gross production of grain for a long time occupied a leading position developed countries. With the "green revolution" in the last decade some developing countries, were able to quickly increase production cereals (China, India, Indonesia, Brazil).

Cereals are of great strategic importance. Usually consider if the country produces grain at least 1 000 kg / person, it  provided not only meat but also major types of animal products. Most developed countries are provided with grain: Canada, Australia, USA, France and Argentina. In the crowded countries of Asia and Africa this rate is very low 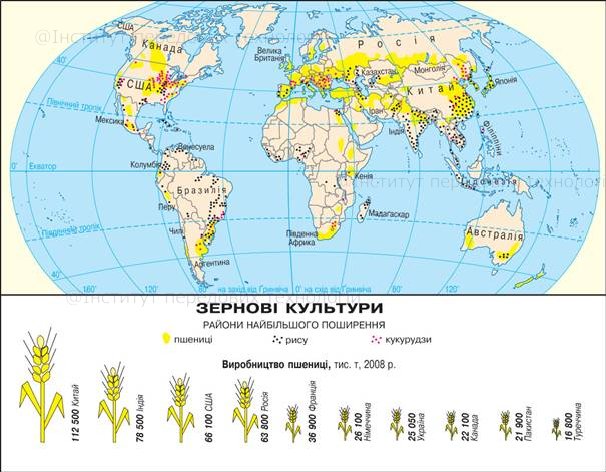 To estimate the level of development of grain farming in the country used the average yield of grain crops. His highest values (50-75 kg / ha) typical of developed countries and for some countries with intensive agriculture (Japan, U.S., South Korea, Egypt). The lowest yields - in the poorest African countries (1-10 kg / ha).

The major crops - wheat, rice and corn, which called "three loaves of mankind". Gross harvest them the same. By wheat acreage nearly twice the area dominated by rice, which can  give 2-3, and sometimes four crops a year.

Rice is grown mostly in Asian countries with monsoon climate. Among the other regions of significant production of rice are Brazil, USA. 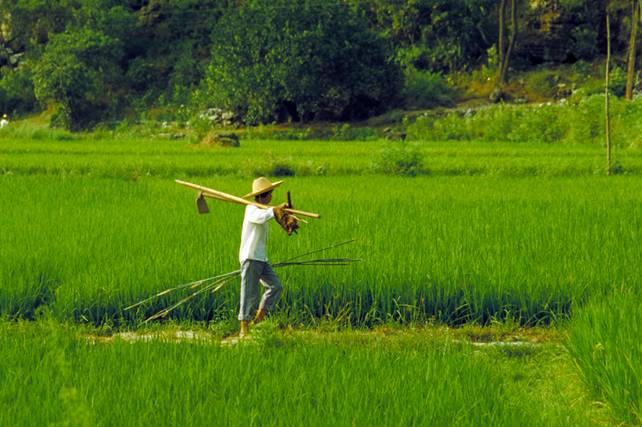 Gross harvest of barley and millet crops, oats and rye significantly lower than wheat, rice and corn. The largest gathering of the country's barley crop temperate and subtropical climatic zones of the Northern Hemisphere (Canada,  Russia, Germany, Spain, France). Barley - feed primarily, but not food crops. In addition, some countries (Germany, Czech Republic), he  is the raw material for beer production. Millet, sorghum, dzhovar, badzhra, rahi - are important food crops for most African countries and some Asian countries. In the U.S., Latin America it is widely used in the production of fodder. Major crops millet crops are harvested in India, Nigeria, the USA, Mexico and China. 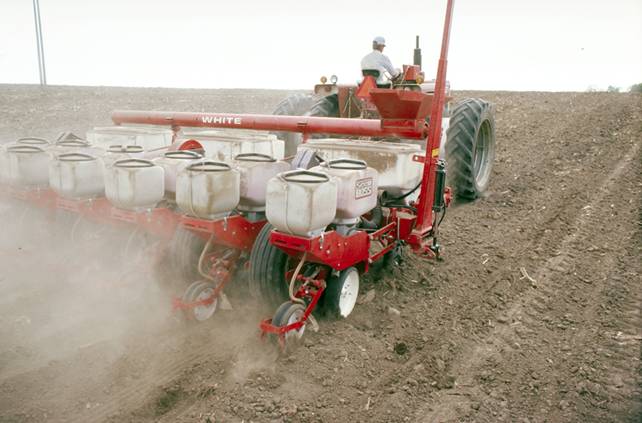 In global trade usually gets no more than 10% grain. Since the grain is largely strategic goods, each country trying to produce it themselves. In recent years large grain exporters are the USA, Canada, Australia, Argentina, the country European Union, Australia, China, major importers - countries Latin America, North Africa, South and West South-East Asia. 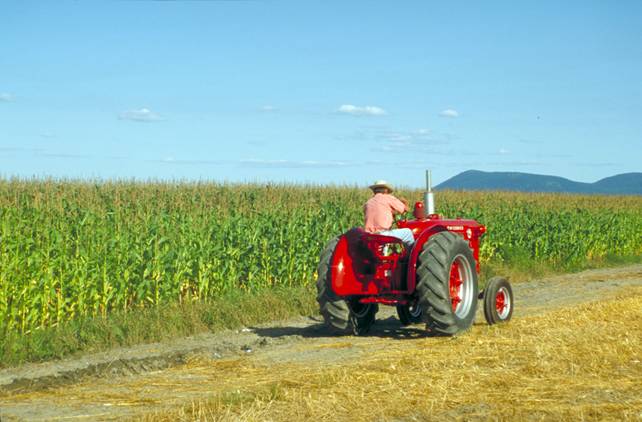 Among the leading position of the oil, soy, canola, sunflower and peanut. 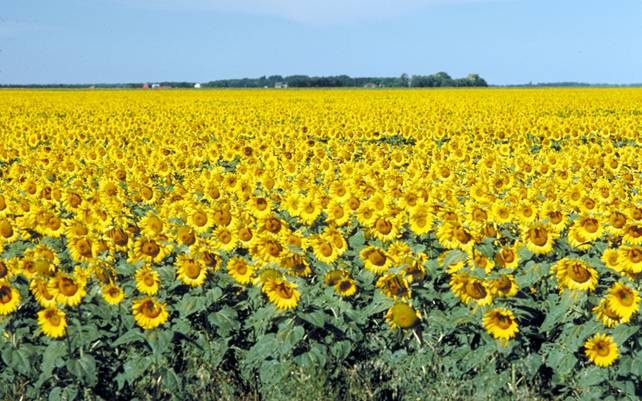 The major soybean growing areas in the world are countries with large rainfall in the summer. Homeland soybean consider China. But  major crops over the past decades collected in the United States. Forcefully increasing production of soybeans Latin America (Brazil, Argentina, Paraguay, Bolivia) and India. Soya is an important culture for fodder production due to larger protein content.

The most popular among sugar crops have received only two - sugar cane and sugar beet. Sugar cane was cultivated in V  Art. in Bengal, from where it spread around the world. But it is nowhere more not well settled, as in Latin America. Sugar beet was domesticated much later. The first sugar beet received in Germany in late eighteenth century.

Throughout the nineteenth and early twentieth century. main sugar culture was considered sugar beet. At this time sugar producers were developed countries. Further production and moved to countries that developing countries by the proportion of sugarcane has increased dramatically (up to 70%). Sugar production from sugar cane was more effective than that due to its high yield. The maximum yields of sugar cane  collect Brazil and India. The south of the country specializing in producing sugar from sugar cane, and the north - from sugar beet. Only two countries (China and the U.S.) producing sugar from both cultures. The powerful sugar exporters are Brazil, Cuba, Australia, Thailand, France, Germany, major importers - Russia, China, Japan, USA, India, UK. 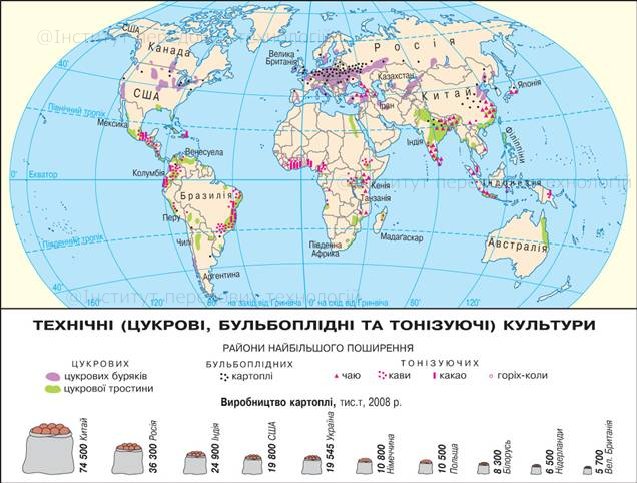 Important tonic cultures are coffee, cocoa and tea.  For each of these cultures transition from an historical "homeland"  the new location. Yes, the birthplace of coffee was Africa, and large modern  area of cultivation was Latin America. The largest harvest of coffee collected in two countries - Brazil and Colombia. Recently, fast increases the total coffee export duties and Asia (Vietnam, Indonesia) African (especially C

Brazil and Colombia, which most coffee is grown, hardly compete  each other. Brazil cultivates regular coffee that is grown on plantations outdoors and gather combine. This coffee has a bitter taste and black. Colombia cultivated elite varieties of coffee. They are grown in the shade of tall trees and collect manually. This coffee has a sour taste aroma.

Tea was cultivated in China, which now consist of its most varieties. Over 100 years of the largest producers of tea is a former British  colonies: India, Sri Lanka, Kenya. Recently, significantly increased production of tea, Indonesia, Turkey, Vietnam, Argentina.

"Homeland" of tobacco, which are considered the drug culture, is Latin America, from where it spread around the world. The largest China became a producer of tobacco. It is far behind India, Brazil, USA. U.S. gradually gross yield of tobacco, while countries that  developing countries - are increasing. Large crops of tobacco collect Mediterranean countries (Turkey, Greece, Italy) and some countries Africa (Zimbabwe, Malawi).

Go to the tonic can be enrolled and drug culture that widely used in medicine. Major suppliers of these cultures are Asian countries - Afghanistan, Pakistan, Iran (the country's "Golden crescent "), Myanmar, Thailand, Laos (" Golden Triangle ") and some Latin American countries, primarily Colombia. Governments of all civilized countries have a fight against the illicit traffic in narcotic plants. 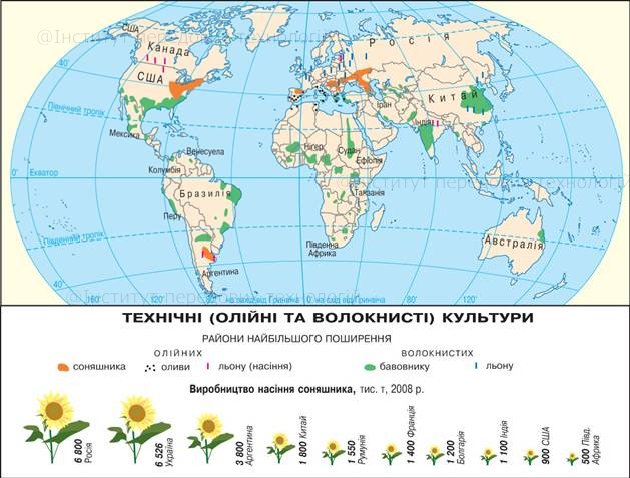 It is important to growing food crops such as potatoes, vegetables and fruits. Currently, the gross collection of major potato positions in the world are China, Russia, India, USA, Ukraine, Germany, Poland, Belarus, Netherlands, Britain waged. Most of potato per capita  growing population of Ireland, Belarus, Poland, the Netherlands.

Centres of origin of important crops 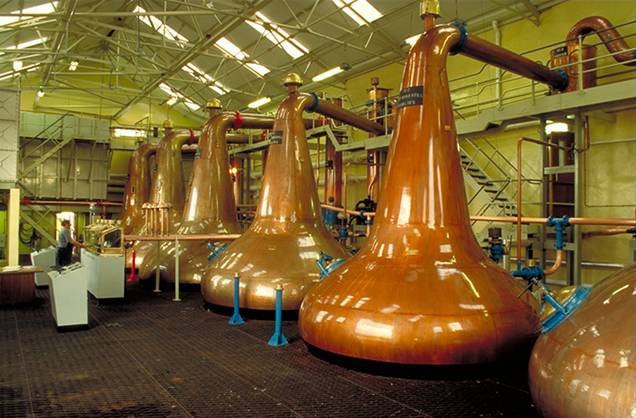 In the animal is divided into four main areas - farming, pigs, sheep, chickens, and others - horse breeding, verblyudarstvo, olenyarstvo, sericulture.

Among the individual regions of the world most numerous cattle Cattle are Asia, Latin America, Africa. In addition to the cows here bred buffalo, zebu, vatusi. Productivity of cattle in countries developing small. Cattle in Europe  and North America are few, but highly productive. Developed countries produce the bulk of the global beef and milk. 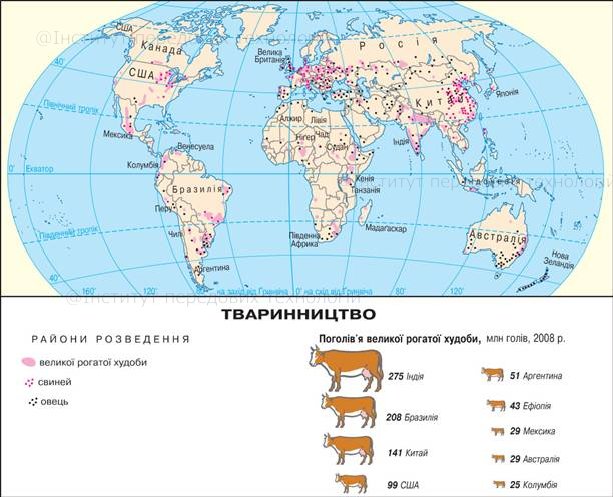 In most poultry breeding hens, to a lesser extent - geese ducks, turkeys. Poultry produces eggs and meat industrial basis. Of the total world poultry 40% occurs in Asia, where leaders are China, Japan, India, Indonesia. On European countries accounted for 17%. Most poultry is grown in France, Great Britain, Italy and Romania. In North America accounted for 11% (About 1 / 2 U.S., 1 / 4 in Mexico), in South America - 10% (2 / 5 in Brazil) to Africa - 9% (Nigeria, Ethiopia, Egypt, South Africa).

Great importance in the diet of the population play a seafood especially fish. World Fisheries an annual 75 million tons of fish and another 20 million tons  get artificial breeding of fish. 2 / 3 of marine fish produce in the Pacific  Ocean off the coast of America and East Asia, and 1 / 4 - in the Atlantic Ocean off the coast of Europe and North America. The most numerous herd of horses in China, Mexico, Brazil, the largest camels bred South-West Asia and North Africa reindeer - in Russia, Canada, United States (Alaska) and Scandinavian countries. 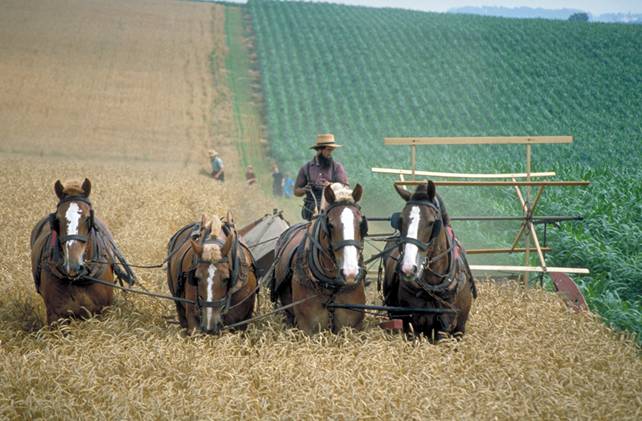 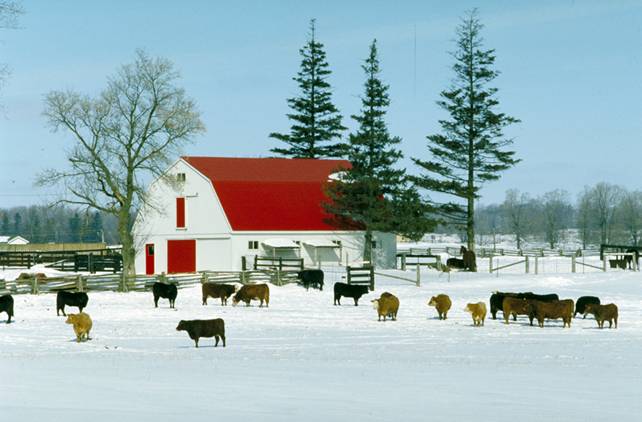