Kievan state in the reign of her and Sviatoslav

Svyatoslav I. (c. 939 - 972 years) - Grand Duke of Kyiv (945-972 years). Son of Prince Igor and Olga. All public events like Sviatoslav I. objected Olzhyni: princess was zealous Christian, and Svyatoslav stubbornly clung paganism, during Olga was not any confrontation with neighbors, always fighting the same Sviatoslav; Olga cared about the internal affairs of state, and Svyatoslav despise them that reproached for Kiev him: «You, prince, a strange land and dbayesh looking about her, and his left ...» But despite this chronicler tell of Sviatoslav with extreme sympathy, bending before polkovodnytskym talent, courage, and chivalrous zvytyazhnistyu and sincerity: «was very brave and easy. Walking by, Jako pardus, many wars he did. Wagons for the same s oboyu he driving or was told no, no meat is cooking, but potonku narizavshy horse or beast or Wolowyna spikshy and corners, he ate it. Even he had no tent, and pitnyk fame and put a saddle at the head. These are all the other warriors with him. And he sent messengers to other lands, saying: "I want you to go». That Sviatoslav put in the mouth expressions, which was destined to become cruise: «Dead shame not know," Do not land posoromymo Rus » and others. Interesting evidence of Svyatoslav and keep a foreign source. For example, the Byzantine historian Leo Deacon left the sketch Ruthenian Prince: « emperor the spot agreed at talks in gold-plated weapons, the horse came to the shore of the Danube, accompanied by a large detachment riders sparkled weapons. Sviatoslav pereyizdyv the river in a boat and sitting on an oar, the tomb along with other without any difference. In appearance he was: average height, not very high, not too low, bushy eyebrows, with blue eyes, flat nose, with a goal enoyu beard and thick mustache. His head was completely naked, but only on one side hung a strand in itolossya that meant distinction of race; neck chunky, strong, broad shoulders and the entire state rather slim. He seemed sullen and wild. In one ear sticking up for his gold ring, adorned with two pearls with rubies, set among them. Clothes on it was white, nothing but purity, the other not great ».

Double Olga came ambassadors from Derevlyany, seeking his posvataty derevlyanskoho Little Prince - and twice found in Kiev death. Then Olga cunning overcome derevlyanske army and Iskorosten (derevlyansku capital) took up the siege. After imposed on the vanquished iskorostentsiv tribute light - a few sparrows and pigeons from the court. Derevlyany not understand in what sense this puzzle wise Olga - and suffered a final defeat.

Olga for the first time in the history of the Rus resorted to measures that involved the elimination of local knyazhin: it abolished the Board derevlyanskoho Little Prince, subordinating derevlyansku land directly Kyiv.

3. Foreign policy of Princess Olga. The visit to Constantinople.

So Going to Tsarhrada, Princess Olga wanted to restore peaceful inter-State agreement between Rus and Byzantine Empire - after the manners of the times acted agreement until the lords were living, that concluded it. Death of Prince Igor and Olga encouraged to go to Constantinople, the new text of the agreement. However, it concluded vochevydyachky was not. And the relations of Russia and Byzantium, quite naturally, became cooler.

Some easing of relations with Byzantium Olga forced to look for another strong ally.

For several centuries, according to historians - not later than 13 centuries., Olga began to honor as holy.

military presence in the lands of Rus Khazaria so undermined the strength of the State, to restore the former greatness, it failed and soon fell into decline.

territorial acquisition by Sviatoslav short time has been lost.

smaller and not as little Svyatoslav campaign was effective in the Balkans. Launched by 967, it lasted several years and consisted of two trips.

In the absence of Sviatoslav 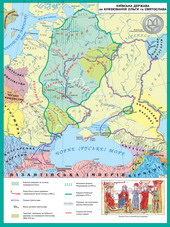 Kiev State's reign at her and Sviatoslav 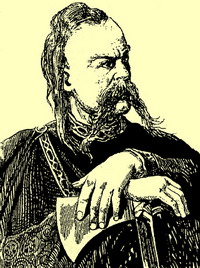 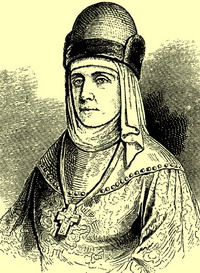 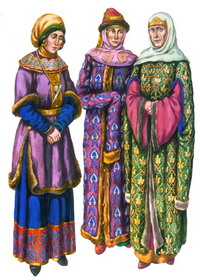 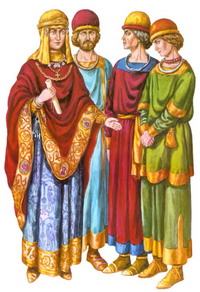 Kievan princess from a court 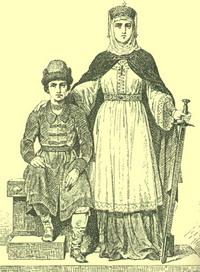 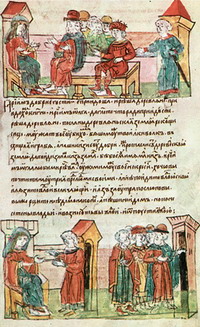 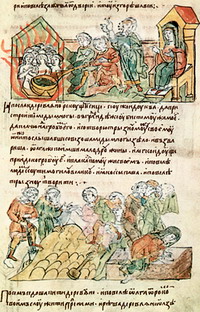 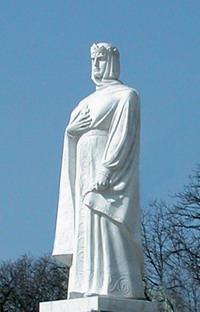 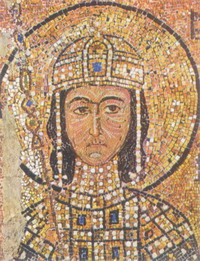 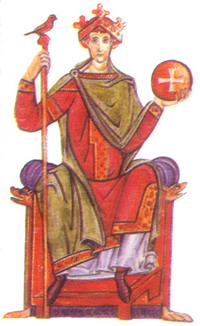 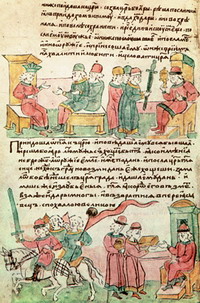 Sviatoslav Actions in the Balkans. Drawing from the chronicle 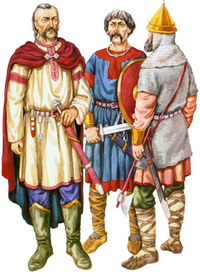