Kiev State under Yaroslav the Wise

«Russkaya Pravda» - collection, or arch, Rus laws, which consisted of few generations. The oldest parts created during Yaroslav the Wise, a separate part of the article concluded Yaroslaviv sons - Charter Yaroslavychi. In "Ruska Pravda" includes articles and later times. Collection in force on the territory of Ukraine, Belarus, Lithuania and Russia for several centuries, became the basis for the development of law and justice.

Gospel (from the Greek. Tidings) - one of the most important parts of the New Testament, consisting of the first four books written by evangelists Matthew, Mark, Luke , John. It describes the earthly life of the Lord, the Son of God, Jesus Christ: His teaching, miracles, religious suffering, death, resurrection and ascension into heaven.

Graffiti - inscriptions and drawings scratched on walls and architectural details of ancient buildings, containers and other items that are found during archaeological sites.

Mosaic - Appliances decorating walls and floors, which cement-based in a certain order, the small pieces of colored stone or glass - smalt.

Cathedral - home or a large church in the city, the main church of the monastery. Cathedral Church pravoslvniy called large meeting of representatives of clergy and laity to discuss important issues and are made binding decisions.

Patriarch - the highest title of the cleric in the Orthodox churches.

Metropolitan - rank second, after the patriarch. Standing at the head of the church and the territorial unit - the metropolis.

YAROSLAV WISE (c. 978 - 1054) - Grand Duke of Kyiv (1019 - 1954). Son Vladimir Svyatoslavich and Polotsk Princess Rogned Rohvolodivny . Prince Yaroslav the Wise lucky, say researchers, is much more than all his predecessors and even the many successors. He lived a long life and died at the height of her fame and power. To this day preserved marble sarcophagus with the remains of it, to explore which scientists not only restored the appearance of Prince, but also found to have suffered a disease. The life of Yaroslav and his family tell the Russians are not the only records, but many a foreign source. On the walls of Saint Sophia Cathedral in Kiev - the temple, built by Yaroslav the Wise, the oldest fragments of images, among which are some of the most Yaroslav and his family. After many campaigns and battles, winning in the confrontation with the brothers right to rule in Kiev, Yaroslav avoid accusations of cruelty and guile, and remained in the memory of posterity peaceful, quiet and prudent prince, who showed enthusiasm for books, often reading them day and night, for which he was honored by the name of Wise.

1. The power struggle between the children of Vladimir Svyatoslavich

Death of Volodymyr the Great destroyed a set in the state system, four years lyhomanylo country, ran mizhknyazivski intestine wars for power in Kiev, during which the arrested chairman Volodymyr's four sons, destined to become the winner Yaroslav.

entire blame for the bloody intestine wars between the Russians Vladimirovich written monument lay on Sviatopolk - elder living at the time the children of Vladimir. It Svyatopolk on his father's death in 1015 became established in Kyiv.

deceased brothers Boris and Gleb were soon joined the ranks of the saints: they are destined to become the first saints canonized Ruthenian church. And just like them and we poshanovuyemo. Svyatopolk was condemned by fratricide Cain as the Old Testament - history still remembers him as Sviatopolk Damned. And the glory of Yaroslav the Wise earned a fair ruler, who ended the intestine wars and first started to commemorate the victims of fratricidal war, having found their remains and buried with honors in Vyshgorod.

1019 chronicler занотував: «sat Yaroslav in Kiev, obter sweat from his wife, showing a great victory and the labor».

therefore only from 1036 Jaroslav yedynovladnym became ruler of Kievan Rus.

Preserving the territorial integrity and unity of the Rus

news of the last, winning for Yaroslav battle against Pechenegs that occurred in the walls of Kyiv, published in 1036, however, modern historians refer to it in 1017 to commemorate the victory Jaroslav ordered the construction of magnificent temple town of Battle - St. Sophia Cathedral .

strongly promoted the establishment and spread in the Ruthenian lands Christian teaching.

Educational activities of Yaroslav the Wise

Interstate Relations Kievan Rus demonstrate great authority of the state of Yaroslav the Wise in Europe. 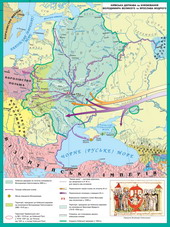 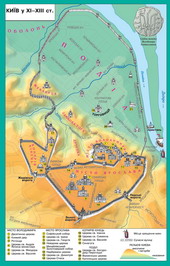 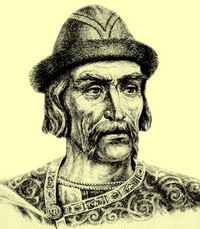 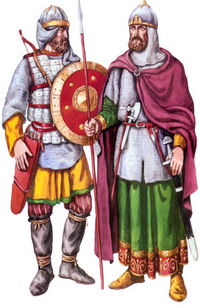 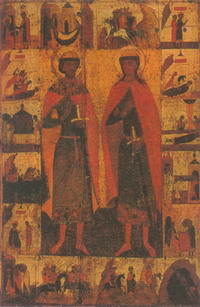 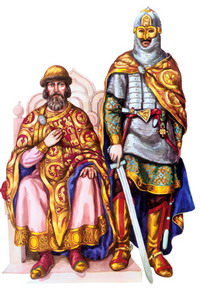 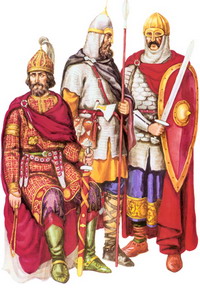 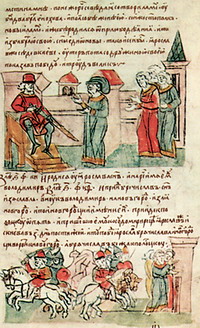 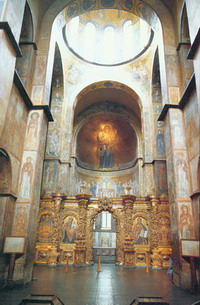 The ruins of the Golden Gate. Figure 19. 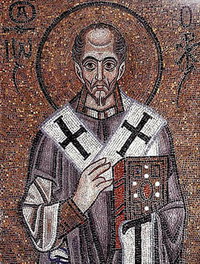 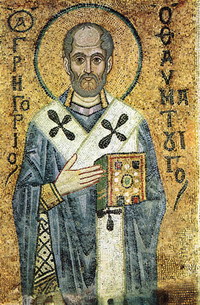 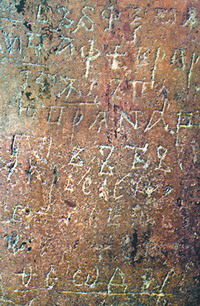 The inscription on the wall of St. Sophia Cathedral 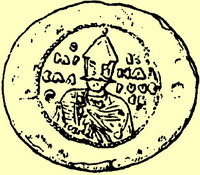 Seal of Yaroslav the Wise 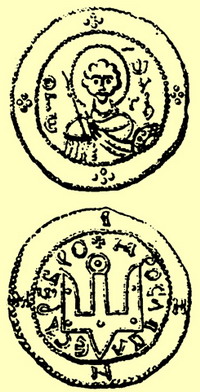 Coins of Yaroslav the Wise 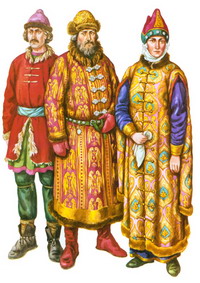 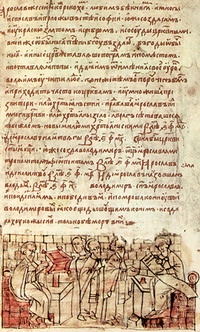 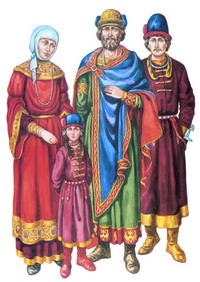 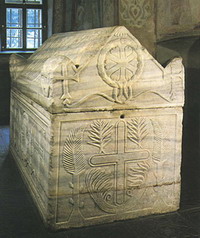 The sarcophagus of Yaroslav the Wise