Doba disintegration researchers called the period in the history of Kievan Rus in the mid 12 to mid 13 century. Earlier, the Rus, through strife and discord remained centralized monarchy, then the mid-12 century. it began to manage the strongest association of princes - the princes of autonomous principalities. Congress legalized Lubech patrimonial system developed so that the separate rulers increasingly felt in their possessions by independent owners. Actually, in strengthening the independence of autonomous principalities and is the essence of integrity.

Feudalism - social system which has such social phenomenon as a combination of political power of land ownership, the dependence of peasants on feudal, feudal hierarchy and vasalitet, feudal fragmentation.

barony - feudal land ownership, which peredavalos inheritance, it could sell, exchange and sharing.

1. Causes of disintegration of Kievan Rus

Historians explain the different causes of disintegration of Kievan Rus.

Yet, despite the irreversibility of decay and the increasing independence of land-principalities, Kievan Rus to the mid-13 century. where the only state sources - and the only area with common laws and only church.

fragmentation interprets not as the collapse of the state as a change in its structure and form of government. Disintegration times of Kievan Rus researchers called federal monarchy. form of government characteristic of Kievan Rus disintegration times, defined as collective suzerainty : instead of one large power Prince performs most influential association of princes.

Greatness of a capital city

Becoming a consolidate There was

co Kyiv continued political authority die away. Kyiv earth podribnylasya a significant number of shares owned, and the last Kyiv prince, whose reign was an era of disunity to learn about powerful convergence forces Mongols - nomads, invaders, and later under attack Kievan Rus which ceased to exist, fled the city.

Territory and the main city

Chernihiv directly associated with the event, her greatest work immortalized in ancient Ukrainian literature - a poem «Tale of Igor».

brilliant poet of the 12 century. advantage of the unsuccessful campaign of Novgorod-Seversky conceited Prince Igor, to appeal to the Ruthenians with unity and reservations call the evil, that pushed him to the ground Rus mizhknyazivski strife and discord.

immediate proximity to Kyiv effects included and feature position Pereiaslav princes: volodaryuyuchy in Pereiaslav, if they waited for opportunity to gain Kyiv table.

After the death of Vladimir Hlibovychi Pereyaslav unlucky not to princes. They were or were not obeyed and Pereyaslav Kyiv, or correcting those who did not leave behind a visible mark in history. 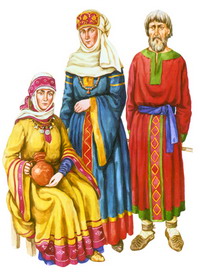 Princely wife in a campaign 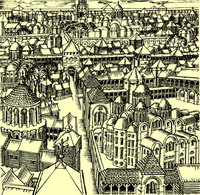 The city of Vladimir in Kiev in early 13 century. 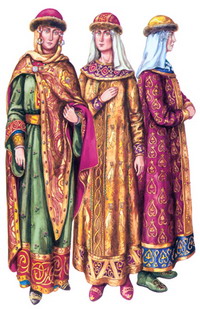 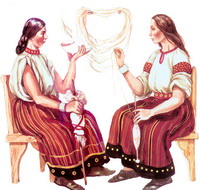 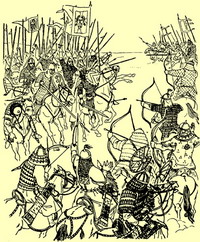 Battle of the Rus Polovtsy